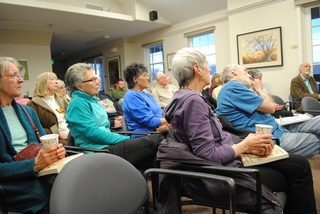 Part of the interesting and engaged crowd at the La Veta Public Library. Photo by Margaret Mercier-Martelle.
I’m midway through a week of speaking engagements in Colorado, and as is usual with such things, I’m probably getting more out of the audiences than they are getting from me.

In two talks so far (one at the University of Colorado-Colorado Springs, the other at the La Veta Public Library) we wandered down a new avenue: What was the role of the easy availability of weapons in the escalation of the violence here in southern Colorado 100 years ago? Was the ability of the striking coal miners to amass rifles and use them against the corrupted National Guard an example for the pro-gun lobby’s argument that the Second Amendment enables citizens to defend themselves against a tyrannical government? Or was easy access to the weapons the reason so many people – at least 75 – died in the conflict?

I think the second is the answer. For those not familiar, in September 1913 thousands of southern Colorado coal miners walked out on strike after coal operators refused to negotiate over a list of workers’ demands, topped by recognizing the United Mine Workers as the miners’ union. In that era, the coal operators wielded incredible political and economic power in the state, and as the strike evolved the coal operators and the government seemed, from the perspective of the strikers, to have merged into one force arrayed against them (the local courts were corrupt; constitutional protections against search and seizure and other basic liberties were usurped; state laws governing mine safety and wages were ignored, etc.).

So the miners walked out, a strike that began in an atmosphere of violence (one union organizer was killed before the strike even began) that surged and ebbed until the April 20, 1914, Ludlow Massacre, in which eleven children and two mothers died in a fire that swept through the Ludlow tent colony. Those deaths launched ten days of revenge by rampaging union supporters who attained control of most of the Front Range from the New Mexico border to near Denver. The miners and their supporters didn’t stand down until President Woodrow Wilson sent in the U.S. army as a peacekeeping force, and the irredeemably compromised National Guard retreated from the field.

In my view (which I argue in my book, Blood Passion: The Ludlow Massacre and Class War in the American West), the miners were freedom fighters standing up against the corrupt political and economic system. But as we've been discussing this week, in the end the violence achieved no tangible gains. Life in the mines continued, and the strike concluded with a whimper in December without achieving the main goal: Union recognition. Ultimately, the state court ended the corruption in Huerfano County, one of two centers of the worst of the strike violence, and voters ousted the incompetent governor who had lost control of the National Guard and the state, in an election that shifted the base of political power away from the coal operators.

So it was democracy, not the availability of guns, that ultimately prevailed.

And that was only one slice of the discussions we’ve been having. The Colorado Springs Independent posted/published a Q&A with me about Ludlow, which also lists the rest of the week’s talks. If you’re in Colorado, come join us.
5 Comments

Scott, always good to see you. You provoked some commentary from a number of us at the conference and sorry you weren't there to participate in it. We continued to debate the issue of Was Ludlow a Massacre. I wrote something, only to find Anthony DeStefanis had written something as well. We hadn't looked at each others but there is overlap and distinctions. Hope you take a look.

I also want to state that I read an interview you gave that mentioned Mother Jones and I feel diminished her contributions. In my presentation, I showed that she was a primary architect of the Colorado struggle, and was a key factor in making it global. She was not just a speechmaker, really.

Yes, Ludlow was a Massacre by DeStefanis/Feurer

Good to see you, too, Rosemary, and thanks for the comment. Can you post a link to the articles you mention that you and Anthony wrote? And to the interview that you mention?

I hope you enjoyed the weekend in Pueblo.

Yep, already found it thanks. I sent them a response.

This certainly has initiated quite a dialog