The Madman and the Assassin: The Strangte Life of Boston Corbett, the Man Who Killed John Wilkes Booth

The Madman and the Assassin: The Strange Life of Boston Corbett, the Man Who Killed John Wilkes Booth is the fascinating story of the Union cavalryman who killed Booth, President Lincoln's assassin.

The killing of Booth made an instant celebrity of Corbett, and his peculiarities made him the object of fascination and derision. Corbett was an English immigrant, a silk-hat finisher hatter by trade where he was exposed to mercury at a time when no one knew the damage the element can do (including causing mental problems - thus the phrase, "mad as a hatter").

A devout Christian and evangelist who lost his wife at a young age to illness, Corbett castrated himself so that his sexual urges would not distract him from serving God. When the Civil War broke out, he was one of the first volunteers to go off to fight, a path that would in time land him in the notorious Andersonville prison camp, and then in the squadron that cornered Booth in a Virginia barn.

The Madman and the Assassin is the first full-length look at the life of Corbett, a man who was something of a prototypical modern American: Thrust into the spotlight by happenstance, he endured an unwelcome transformation from anonymity to celebrity before descending into madness on a remote Kansas homestead.

The Admiral and the Ambassador: One Man's Obsessive Search for the Body of John Paul JoneS 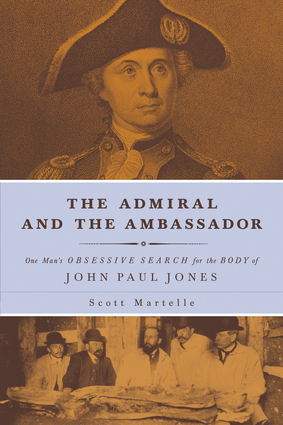 As a veteran journalist, I've long been drawn to overlooked narratives from the past. In this case, a magazine article questioning the identity of the body sealed up in the John Paul Jones sarcophagus at Annapolis led me to the intriguing story about the search for the admiral's body more than a century ago in Paris.

The frame of the story invariably shows up in the final chapters of Jones biographies. But I was more curious about Ambassador Horace Porter, the man who put his own fortune behind the expensive search to try to find and recover Jones's body (and yes, I believe he found the right one). The lives of Jones and Porter, I realized as I dug into the research, cover large swaths of American history, from the Revolution to the Civil War to the nation's emergence as an industrial power and then a world power with the 1898 Spanish-American War.

But it also is a story involving fascinating characters, from Jones, the Scottish gardener's son who, in some eyes, was the creative force behind the US Navy, to Porter, a Civil War hero who moved among the upper reaches of American industrialism and politics. It touches on presidents Ulysses S. Grant (Porter was an aide in both the war and the White House), William McKinley (Porter raised millions in the campaign to get him elected), and Teddy Roosevelt (under whose administration Jones's body was finally discovered and moved to the US Naval Academy, where it now rests).

I hope you find it as intriguing to read as I found it to write.

The Fear Within: Spies, Commies, and American Democracy on Trial

The Fear Within: Spies, Commies and American Democracy on Trial explores the 1949 trial of 11 leaders of the Communist Party-USA who were charged under the Smith Act with "teaching or advocating the necessity of overthrowing the United States government." They weren't charged with doing anything, just talking about it, without any specific plans for its actually happening. In essence, they were convicted and imprisoned by the United States government for their thoughts and beliefs.

I got launched on the project because I found the story fascinating, and relatively unexplored outside the realm of Cold War historians. I also found parallels to the USA Patriot Act, in that it and the Smith Act were enacted out of fear of the outside. It's a perverse phenomenon that in times of national crisis, the U.S. tends to undercut the principals it professes to be fighting to preserve -- in this case, freedom of speech and assembly, among others.

The 11 convictions were upheld by the U.S. Supreme Court just after the Korean War broke out. But a change in the makeup of the court, and a lessening of the Red Scare passions, led the court six years later to effectively reverse itself and gut the Smith Act. But by then the men had each served five-year sentences (some more for going on the lam; some less for good behavior).

It's a fascinating story, complete with spies, riots, legal chicanery and intriguing characters.

Blood Passion: The Ludlow Massacre and Class War in the American West

But Ammons misread the signals, and on April 20, 1914, a full-scale battle erupted between the remaining militiamen and armed strikers living in a tent colony at the small railroad town of Ludlow. Eight men were killed in the fighting, which culminated in the burning of the colony. The next day, the bodies of two women and eleven children were found suffocated in a below-ground shelter.

The "Ludlow Massacre," as it quickly became known, launched a national call-to-arms for union supporters to join a ten-day guerrilla war along more than two hundred miles of the eastern Rockies. The convulsion of arson and violence killed more than thirty people and didn't end until President Woodrow Wilson sent in the U.S. Army. Overall at least seventy-five men, women, and children were killed in seven months, likely the nation's deadliest labor struggle.

In Blood Passion, journalist Scott Martelle explores this little-noted tale (outside the world of labor historians) of political corruption and repression and immigrants' struggles against dominant social codes of race, ethnicity, and class.

More than a simple labor dispute, the events surrounding Ludlow embraced some of the most volatile social movements of the early twentieth century, pitting labor activists, socialists, and anarchists against the era's powerful business class, including John D. Rockefeller, Jr., and helped give rise to the modern twins of corporate public relations and political "spin."

But at its heart, Blood Passion is a journalist's dramatic retelling of the dramatic story of small lives merging into a movement for change, and of the human struggle for freedom and dignity.