A review, and a new gig 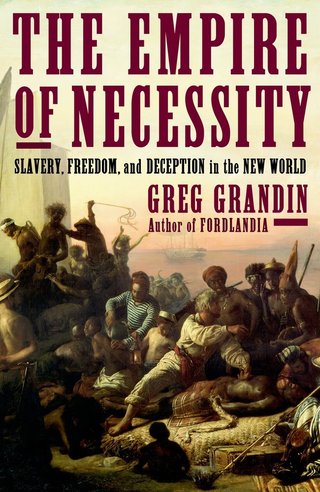 The text you type here will appear directly below the image
This weekend's Los Angeles Times carries my review of Greg Grandin's very good new book, The Empire of Necessity: Slavery, Freedom, and Deception in the New World, which builds off the story of a single repressed slave revolt into a thoughtful revisitation to the spread of slavery in South America. The review runs in the Sunday paper (already available online here).

The timing is coincidental, but it's fun that the review appears in the newspaper the day before I start my new job as an editorial writer for the LA Times, returning to the paper and full-time work for the first time since 2008. More about that momentarily.

Grandin's book, I note in the review, is more than a simple history:

He also uses it as a spark for rumination on paradox: an antislavery ship's captain re-enslaving Africans; an "age of liberty" coinciding with "the Age of Slavery"; and the transition of an economic system based on chattel slavery to one of wages, a different kind of bondage. As Herman Melville's Ishmael asked in the beginning of "Moby-Dick," "Who ain't a slave?"

At one point, Grandin compares Melville's Ahab from "Moby-Dick" with Delano. Where Ahab has become "synonymous with ruin" in the pursuit of obsession, Delano "represents a more common form of modern authority." As the captain of a seal ship that can find no seals (they'd been hunted to near-extinction), Delano struggles in a rapidly changing market under pressure from creditors and financiers to turn a profit. Abandoned by its captain, the Tryal is a prize to capture and sell — ship, stock and slave cargo included.

"Caught in the pincers of supply and demand and trapped in the vortex of ecological exhaustion, with his own crew on the brink of mutiny because there are no seals left to kill and no money to be made, Delano rallies men to the chase, not of a white whale but of black rebels. Their slide into barbarism … happens not because he is dissenting from the laws of commerce and capital but because he faithfully and routinely administers them."

The review is the last I've done as a freelance writer, though I expect to continue reviewing after I start back at the LA Times, a move that I'm looking forward to. As much as I enjoy the freelance life - particularly the control over my own time and projects - I'm drawn to this fresh challenge of writing editorials. It is one of the few things in newspapers I haven't tried yet, and after working in near-solitude for so long it will be an interesting change of pace to become part of an editorial board, and join in the give-and-take of coming to a consensus on some of the key issues of the day.

And I also expect to keep writing books, though at a slower pace. My The Admiral and the Ambassador: One Man's Obsessive Search for the Body of John Paul Jones comes out in May, and I'm coming up on the midway point of another book I'm keeping under wraps for the moment, which will come out in 2015. When it does, that will make five books of history published in a span of eight years. So expect a gap after the fifth book comes out.

Meanwhile, I hope to announce in a few weeks book tour plans for Th Admiral and the Ambassador come May, a story I'm very excited to have written about. Read More
Be the first to comment
Email here to arrange readings or order signed copies of any of my books