On Dana Goodyear, poet as journalist/journalist as poet 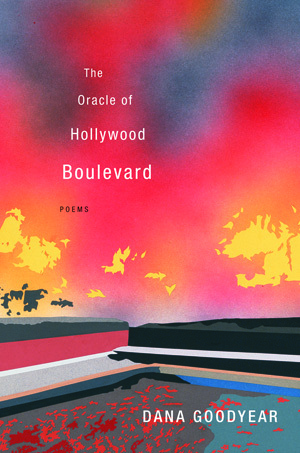 Regular readers of The New Yorker will recognize Dana Goodyear as the Los Angeles-based correspondent who keeps trying to explain us to the Manhattanites who think the West Coast is somewhere over there on the other side of Tenth Avenue. And she's done some very nice work in that regard, including this recent piece on a sub-radar dining fad: Chef Craig Thornton and his private dinners.

But Goodyear also is a poet, and the Los Angeles Times has a short profile I did of Goodyear tied to the release of her second collection of poems, The Oracle of Hollywood Boulevard. From the piece:

Poet and journalist Dana Goodyear perches on a swivel chair in the second-floor writing studio behind her Venice home, the windows cranked open to a gentle ocean breeze. Low rooftops and tall palm trees stretch to the horizon, and Goodyear points to an anomaly just across the alley — a faded surfboard tossed up and forgotten atop a neighbor's single-story house.

Such juxtapositions appeal to Goodyear, a New Yorker magazine staff writer. And while the misplaced surfboard doesn't make an appearance in her new book of poems, "The Oracle of Hollywood Boulevard" (Norton, $25.95), it reflects the kind of unexpected encounters that she says drives her poetry.

"There's something about the shape that a poem takes in my mind before I write it that has to do with suddenness," Goodyear says. She finds it's more effective to deal with that immediacy in poems than in her better-known nonfiction magazine pieces, which she describes as "more outside and objective. For me, it makes sense to address shocking experiences through poems because of the way poems also have that effect on the reader."

It was a fun piece to do. Any time a writer gets to spend a couple of hours with another writer talking about writing, well, you get the point.

Oh, and she's working on her first nonfiction book, too. It's on American foodie culture. And I suspect her piece on the private dining fad will be a part of it. Read More
Be the first to comment

Writing, and beating the long odds

Tags: writing, authors, fiction
The new Orange Coast magazine has a short piece I wrote on Thanhha Lai, a former journalist and a Vietnamese American teacher who recently won the National Book Award in the Young People's Literature category for her verse novel, Inside Out & Back Again. It's a wonderfully done book in which Lai novelizes her real-life experiences as a sudden transplant in America.

The part I love about her story is that she spent 15 years working on a novel that she finally gave up on, then turned her attention to the Inside Out & Back Again -- and won one of the most coveted awards in American letters. From my story:

She focused her writing passion on her arrival in Alabama as a 10-year-old who spoke no English. “I was standing in this playground, not knowing what the kids were saying to me,” Lai says. “For the first time the words were taken from me. I was beyond frustration, and there was nothing I could do. Those feelings never go away.”

Her novel deals with her alienation and fear, family love and obligation, all propelled by the loss of her father, who served in the South Vietnamese navy and remains missing in action. As the south fell to the Communist north in 1975, Lai says her mother faced an impossible choice for herself and her nine children: “It was heartbreaking. Wait for her husband and risk nine lives ... or just go and believe, if he were alive, he would find his way to us. In the end, her children won.”

The book targets young adults, but the knife-sharp writing and her themes of overcoming alienation work across age levels. Pick up a copy. You won't regret it. Read More
Be the first to comment

So this is what I've been up to

Tags: writing, authors, fiction
More than a decade ago I began writing a crime novel and then tucked it away for the best of reasons: My agent, Jane Dystel, sold the first of my history projects, Blood Passion: The Ludlow Massacre and Class War in the American West. But after I finished the third nonfiction book, Detroit: A Biography, I found myself with time on my hands, and unsettled about the next nonfiction project.

So I dusted off the crime novel, tentatively titled Buried, which Jane this week begins shopping around to publishing houses. This is the description from her online newsletter:

Adam Becklund’s world was humming along nicely. Drawn from his small western Michigan hometown to Detroit, Becklund was writing a popular street-oriented column for a Detroit newspaper, had a beautiful girlfriend, an apartment with a killer view, and a life defined by daily routines that left him deeply satisfied. And then his world blew up. In this debut crime novel, BURIED, critically acclaimed nonfiction author Scott Martelle weaves overlapping stories of murder and suspicion against the backdrop of the streets of Detroit. In a matter of days, Becklund finds himself the leading suspect in the murder of his girlfriend, struggling with a sense of grief and guilt over her killing and retaliatory journalism by his rivals, and serving as the best hope his bar-owning friend Tanker has for eluding an elaborate frame job for a second killing rooted in Detroit’s criminal past. The contemporary tale of fear, intimidation and mystery merges Martelle’s gifts as a storyteller, his eye for dramatic details and his grasp of the nuances of history. BURIED is the first in a new series starring reluctant detective Adam Becklund, who finds the balm for his grief in helping others.

So friends in the publishing industry, if you're interested, get in touch with Jane. We now return you to your regularly scheduled day. Read More
1 Comments

Can't wait. (Although you already made us wait 10 years.)

Jonathan Lethem and an enviable gig

Tags: writing, authors, fiction
A couple months ago I drove up to Pomona College near Los Angeles and sat down with author Jonathan Lethem in his new office, where he's now teaching (the resulting profile is here at Pomona College Magazine).

I have to admit to a stream of jealousy. Lethem has a great gig as the tenured Roy Edward Disney Professor in Creative Writing, where he teaches a couple of courses a semester to students who are serious about writing and literature, and has time carved out to pursue his own writing. In this environment, a steady gig for ANY writer is a Godsend (note to hiring committees: I'm available).

Lethem is a smart guy, self-aware and but not overly self-promoting, striking the right balance. We talked a lot about the writing process, and he made a point that syncs with one I make to aspiring writers when they ask about the actual process of sitting down to write. “Nobody is trying to stop you from writing," Lethem said about the distractions he's had to overcome throughout his career. "You just have to structure your day so that you get to it.”

Chris Offutt once wrote something about his own early adulthood that he was an actor who never acted, a painter who never painted, and a poet who never wrote poetry, though he had pretensions to being all those things. He did, eventually, become a writer - by writing.

To be it, you have to do it. So what are you doing wasting you time reading blogs? Disconnect from the electronic world, and write. Read More
1 Comments

FYI Lethem's _Chronic City_ is one of the best novels I've ever read. It's both creative and hilarious.