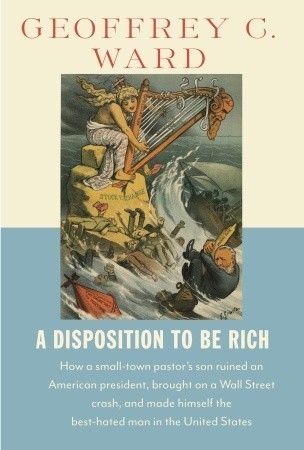 Looking at the Los Angeles Times book coverage this week, you'd think I've been busy. And you'd be right.

Thursday's paper carried a review of a newly translated novel by Sayed Kashua, Second Person Singular, which as I write in the review explores "themes [that are] are universal in a world in which every culture, it seems, has an 'other' against which to play out prejudice, and feelings of supremacy." Kashua, an Arab living in Israel, writes in Hebrew, and he has produced a very good novel exploring the lives of two Arabs who grew up in the occupied territories but moved to Jerusalem to forge futures. And the key to the future, they decide, lies in freeing themselves from their personal and ethnic histories. But can they? Can anyone?

The second review, which is online now but I believe will be in the paper Sunday, is of historian Geoffrey C. Ward's A Disposition to be Rich. The subtitle tells you pretty much all you need to know: How a Small-Town Pastor's Son Ruined an American President, Brought on a Wall Street Crash, and Made himself the Best-Hated Man in the United States. And no, it's not about Bernie Madoff. The "best-hated" man is Ferdie Ward, a 19th century Wall Street investor who stole millions using the classic Ponzi scheme years before Charles Ponzi invented it.

What I didn't mention in the review are the coincidental overlaps with my own life and work. Ward grew up near Rochester, N.Y., where I lived and worked from 1983-86 (my wife's extended family still lives in the area and I visit often). So the geography was fun to read. And the presidential victim was Ulysses S. Grant, for whom Horace Porter served as a top aide during the Civil War, and as private secretary when Grant was president. They were so close that Porter became the key figure in raising money to build Grant's Tomb in Manhattan.

Porter also is the man who found John Paul Jones's body. Small world among all those books. Read More
Be the first to comment

On Condoleezza Rice, and memoirs 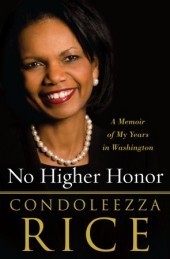 My review of former Secretary of State Condoleezza Rice's memoir, No Higher Honor, is in the Los Angeles Times this morning. Lon-n-n-ng book, more than 700 pages, both exhaustive and exhausting.

My approach to the review was to leave politics out of it, which may or may not have been a good idea. I believe everyone has the right to be the star in his or her own memoir, and Rice gives herself her own due. Had I more patience I'd turn now to the memoirs of Dick Cheney, Donald Rumsfeld and George Bush himself to try a little cross-tabulation, seeing if they included many of the same events, and their different takes on them. But, well, I don't have that much patience. Or curiosity.

But the point of the review was to assess the book, not the person or the policies. Here's the opening:

By now, of course, the key details of former national security advisor and Secretary of State Condoleezza Rice's "No Higher Honor: A Memoir of My Years in Washington" have already made it to public view. Among them: She clashed over policy with Vice President Dick Cheney and Secretary of Defense Donald H. Rumsfeld. Libyan strongman Moammar Kadafi had an unnerving fixation on his "African princess," which revealed itself in a bizarre private dinner in his kitchen. She regretted the timing of a vacation just as Hurricane Katrina was bearing down on New Orleans.

But there's a lot more to Rice's memoir. In fact, with more than 700 pages of reminiscences, there's an awful lot more than those headline moments, making "No Higher Honor" an exhausting walk in Rice's shoes as, arguably, President George W. Bush's most influential foreign policy advisor — a role she stepped into in August 1998, more than two years before the 2000 election, when Bush was governor of Texas.

And given the wars in Iraq and Afghanistan, policies of extreme renditions and the incarceration of suspected terrorists in Guantanamo Bay, combating North Korean and Iranian nuclear ambitions — well, it was a busy time.

It is a fact of American political life that after a presidential administration ends, key figures retire to write their versions of what they had seen and done. Each needs to be read with a bit of skepticism — legacy more than enlightenment often is the driving force. And Rice's memoir is no different.

On author James B. Stewart, and circles of lies 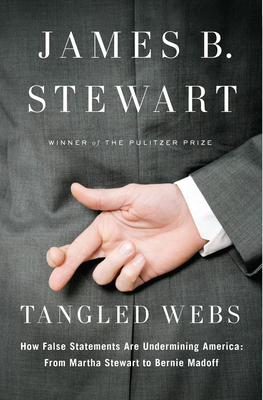 Today's Los Angeles Times carries my review of Pulitzer Prize-winning journalist James B. Stewart's new book, Tangled Webs: How False Statements Are Undermining America: From Martha Stewart to Bernie Madoff, which is a detailed look at some notable cases of high-profile lying scandals from the 2000s. The review begins:

"For a nation whose romanticized history includes a young George Washington confessing to chopping down a cherry tree because he 'cannot tell a lie,' we seem to do an awful lot of lying. But then, the story about Washington is a lie itself, so maybe we're just being true to our national character.

"In his new book, 'Tangled Webs,' Pulitzer Prize-winning journalist James B. Stewart dives deeply into four recent cases of high-profile conspiracies of lies. What he finds does not say good things about us.

As I mention in the review, the book almost chokes on the amount of detail Stewart has dug up from inside each of the scandals: Martha Stewart, the role of White House officials in outing Valerie Plame as an undercover CIA operative; Barry Bonds; and Bernie Madoff.

Yet the details are worth wading through. Stewart does a good job at looking at how the powerful (and the powerless) react in times of stress, and challenge. In the end, it is the ease with which so many choose to lie, and the myriad reasons, that is most sobering. And before readers cheer over clear evidence that seems to confirm the belief that top figures in the Bush II White House saw the truth as a malleable thing, remember Bill Clinton's wriggling when caught with his pants down. Lying to the American people is not the hallmark of one political party or another. And, as Stewart makes clear, it's hardly limited to politics.

So why is it so prevalent in American life? Because people keep getting away with it. And nothing breeds success like success. Leavened, apparently, by a few well-told lies. Read More
1 Comments

The American tradition is, "Stonewall it!"
In the exact same circumstances the British tradition is, "Admit it and resign quick."
I guess culture and honor have some role.

Tags: books, writing, nonfiction, history, reviews
Well, it's been a couple days of good news around here. First came word that Book TV would be airing live my Sunday panel at the Los Angeles Times Festival of Books. Now comes the first major-media review of The Fear With: Spies, Commies, and American Democracy on Trial.

The review runs in the Los Angeles Times this Sunday, but is already available online. And I'm very pleased that the reviewer, Wendy Smith, likes the book, calling it a "cogent, nuanced account." She concludes:

Writing in the 21st century, when the passions of the Cold War era have faded, Martelle does not pretend that all communists persecuted in the postwar years were blameless victims. The defendants in Dennis were tough political activists, and they did believe that socialism should replace the capitalist economic system whose injustices had led them to the Communist Party. But they were not spies, and they had taken no direct action to overthrow the U.S. government; they were tried for their beliefs under a law that violated the United States' first and most vital amendment. Martelle's scrupulous, lucid history resonates with contemporary relevance because it reminds us that freedom of speech and thought are most essential, not when we are feeling most confident, but when we are most afraid.

Beyond saying nice things about the caliber of the work, Smith did a very nice job summarizing the details of what it's about. Let's hope it's the first of many such reviews. Oh, and if it is, don't worry, I won't be blogging about them all. But I will be adding them to the "Reviews etc." tab above, where you can also find past reviews of Blood Passion: The Ludlow Massacre and American Democracy on Trial. Read More
2 Comments

Just finished your Author Profile in Publishers Weekly. I always think about Skeptics and their need to believe or not believe. Proof of truth. Truth of proof. Thank you for playing the role. Enjoyed it

Thanks for the kind words, and I'm glad you enjoyed the piece