In defense of some fellow undecideds, as I vote by mail 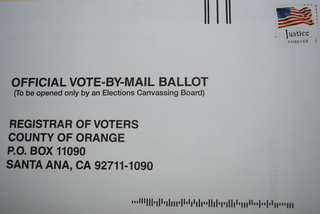 Well, we sat down Friday night for our annual date with the election guide, and to fill out our absentee ballots. It was finally time for this undecided voter to decide, and decide I did. But my indecision was not what you might think.

There's been a lot of noise about those who remain undecided in what has been a presidential campaign of stark contrasts. And a lot of mockery of us undecideds, from our purported stupidity to our lack of a political gyroscope. To which I call bullshit. For two key reasons. One, we aren't all centrists wavering between right and left. And two, some of the most unthinking people I've encountered during my many years of political campaign coverage are those who make up their minds early, and for irrational reasons. Talk about an unthinking engagement with the political process, how about all of those folks who vote Democratic or Republican simply because that's what they always do? Even when their candidate lacks the credentials or credibility to hold public office?

I'm quite certain I follow political campaigns and issues much more closely than the average person, and more closely than many of those who've disparaged us undecideds for our perceived lack of engagement. So my ballot was not cast in a fog. It was well thought out.

In fact, I knew early on who I would not be voting for: Romney. Naked political ambition unleavened by a discernible philosophical framework is a recipe for leadership disaster. He persuaded me during his rightward lurch in the GOP primaries that he was indeed the Etch-A-Sketch candidate, and as a result not someone to be taken seriously sitting in the Oval Office. I became convinced that if he was sincere about many of the positions he had taken, he would lead this country into a Depression-style crisis domestically, and into warrantless wars overseas.

My indecision came over Obama, for whom I voted with pleasure in 2008 (note: as a matter of professional habit I did not vote in elections I covered; I stopped covering the 2008 race in September, so felt free to cast a ballot in that one). He could have been an agent for real political change, but over three years Obama proved to have been a much better campaigner than leader, and to have been co-opted by the Clinton-style pro-corporate centrist policies of the core Democratic Party. He entered office with serious political capital but squandered much of it. It wasn't all bad. The auto bailout was a significant success, and I believe some of his other policies mitigated the economic disaster brought on by the Republicans.

But there's more at stake than money. The health care plan, lauded by Democrats, was too little for the problems we face. Obama could have done better. He was slow to get us out of the wars he promised to get us out of (and added troops to Afghanistan); Guantanamo Bay is still a prison for suspected terrorists (many of whom are being held on the sketchiest of evidence); the National Defense Authorization Act that Obama signed is chilling in its unconstitutional throwback to the McCarthy era; the Obama administration has been even less open than the Bush Administration, as hard as that is to conceive; and Obama is still campaigning about the need to close loopholes that reward corporations for shipping jobs overseas - something he campaigned on the first time around, to little effect.

So my indecision was not between Obama and Romney, but between Obama and someone else. I often turn to the Peace and Freedom Party for my protest vote, but they nominated comedian Roseanne Barr, a joke I can't go along with (and, frankly, destroying its credibility as an alternative party). The Green Party has put up a serious slate led by Jill Stein. And I almost sent my vote there. But in the end I went with Obama essentially as a loud rebuke - well, as loud as a single vote can be - to the Republican Party and its policies, and to the Machiavellian candidacy of Romney/Ryan.

But I'm not happy about it. I may have voted for Obama, but I'm still ambivalent about his leadership, and stand in stark opposition to what the one-time Constitutional law college instructor is doing to our civil liberties.

So in the end, I guess I took the turn Ralph Nader has cried against for years: Don't vote against something, vote for something. This time, I voted against. And while four years ago I voted with a sense of hope, this time it is with a nagging fear that I may have made a mistake. I hope Obama wins, but more significantly, I hope he proves that my fears are unwarranted. Read More
Be the first to comment

A reminder: Detroit-bound for Wednesday talk 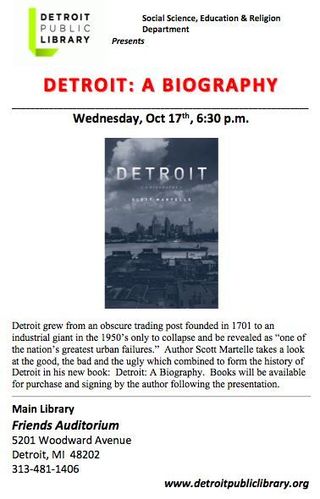 I'm looking forward to heading to Detroit this week for a talk at the Detroit Public Library on Wednesday, then to sit on some panels at the annual North American Labor History Conference at Wayne State University.

The book talk is self-explanatory. We'll be in the Friends Conference Room, starting promptly at 6:30 p.m., where I'll talk about the book and then, I hope, lead a conversation with audience members about their experiences with Detroit. We'll discuss the need to overcome the legacy of racism and governmental/corporate policies to take advantage of what really is a yawning opportunity - a chance to rebuild a city, neighborhood by neighborhood. (And we'll be done in time to catch the Tigers-Yankees baseball playoff game on TV at Honest ? John's bar).

Thursday morning I'll give a reprise of the book talk to launch the Labor History Conference at 9 a.m. in McGregor Hall on the Wayne State campus, with comments from Beth Myers, director of the wonderful Walter Reuther Library; and two Wayne State professors, Steve Babson and Tracy Neumann.

That afternoon, I join Jack Lessenbery and Barb Ingalls to listen to Chris Rhomberg talk about his history of the Detroit newspaper strike, The Broken Table (Barb and I were active participants in that), and then give our take on the book (hint: I think Rhomberg did a solid job).

Saturday morning I'm back to talk about "The Legacy of the Ludlow Massacre" (the subject of my first book, Blood Passion) with Rosemary Feurer from Northern Illinois University, Anthony DeStefanis from Otterbein University, and Jonathan Rees from Colorado State University.

It's an academic conference so there's a registration fee, but I believe they also offer day fees. There should be details on the website somewhere. But the Library talk on Wednesday is free to the public. Read More
Be the first to comment

A great idea for Detroit that I hope really happens 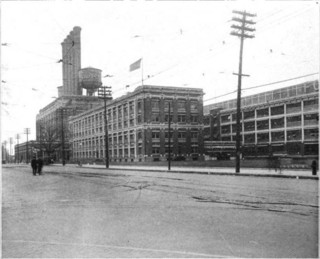 One of the most visible of Detroit's many wasted opportunities, I think, is Henry Ford's former office building in Highland Park, an island city surrounded by Detroit, where his ideas on the assembly line took root and revolutionized the industrial world. The building has been essentially unused for years, and I've thought for more than two decades now that the Albert Kahn-designed building would be the perfect anchor for a Detroit auto-tourism industry.

Crain's Detroit reports that the local Woodward Avenue Action Association is negotiating to buy the building from owner National Equity Corp. From the story:

The association hopes to restore the building and eventually host public tours at the site as an automotive heritage welcome center, commemorating its important role in the automotive industry and in the region’s past, (association Executive Director Heather) Carmona said.

Other possibilities include incorporating mixed-use aspects by hosting tech start-ups from the site and/or turning parts of it into housing.

“It’s literally our story … the story of the manufacturing economy, the $5 dollar day, middle class. It’s a historic resource and economic development opportunity that we cannot let slip away,” Carmona said.

I really hope this works out. Detroiters learned long ago not only to not count a chicken before it's hatched, but probably best to wait until it's fully fledged. Detroit's history is full of failed dreams and frustrated ambitions, and this could still wither and die.

But I hope not. Detroit has a lot of things going for it, and industrial history is high among them. Converting some of these decaying survivors of a great past won't save the modern city, but it can add another dimension to a broad, diverse sweep of positive steps. Read More
Be the first to comment
Email here to arrange readings or order signed copies of any of my books