On Lincoln, and the touchstones of history 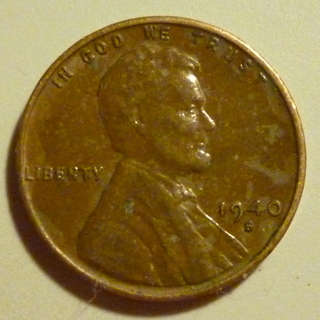 I found a bit of history in my pocket the other day.

We have a couple of receptacles in the house to hold loose change for an eventual run to the credit union. One gets the silver (these are colors, not content) and the other gets the copper pennies. I pulled a small handful of coins from my pocket and, as I began separating them, noticed that one penny had a couple of wheat stalks on the back, curled around the inside edge of the coin. That meant the coin was at least as old as I am (the current Lincoln Memorial design was adopted in 1959). Flipping it over, I found the date – 1940, with the tell-tale “s” below the year meaning it was minted in San Francisco.

You don’t stumble across many coins that old in circulation these days. As coins go, this one’s not worth much to collectors (maybe a dime). The U.S. mint in San Francisco cranked out nearly 113 million pennies that year, so they aren't rare, and the one that cropped up in my change is far from mint-condition. The edges are slightly worn, and the front has a thin layer of shellac over it, as though it had been part of a display at some point.

Yet the coin represents more than a single cent. It is a touchstone to the past. The year this particular coin was minted, Hitler’s Nazi Germany – with Paris already in its control – began a nine-month bombing blitz of British cities. Americans, with vivid memories of the last European war just two decades earlier, wanted to remain neutral. President Roosevelt, fearing what the fall of England would mean for Europe, and the world, hatched his “lend-lease” program to aid the British without committing U.S. troops. That came just a few months after the U.S. Congress, fearful of fascist and communist infiltrators, enacted the 1940 Smith Act, the law that lies at the heart of my second book, The Fear Within: Spies, Commies, and American Democracy in Trial.

So this coin came into the world near the onset of a nearly all-encompassing global convulsion of violence. The world has changed since then. It's become more crowded, more polluted, more complicated in many ways. But it’s unchanged in that we as a species can’t seem to find a way to avoid killing each other in encounters personal, national, and tribal (be the bonds faith or blood).

Maybe that’s our curse, as a species, and as a nation. Over more than 235 years, we have rarely been at peace, from the "pacification" of the native tribes to fights with Mexico, to skirmishes in the Pacific to that massive war among ourselves. And that's just the first century. It's a staggering list to contemplate.

Of our most common four coins, three feature war presidents - the Lincoln penny, the Roosevelt dime, and the Washington quarter. Washington obviously was a general before the nation was founded, and even though he was the first president, it is as the hero of the revolution that we remember him. Jefferson, on the nickel, was part of the Revolution but is remembered mostly for his role in writing the Constitution and expanding the nation. But the bulk of the national medals - our coins - that we carry around are physical reminders of wars past.

And Lincoln, of course, came to a violent end, which means the most common coin in American currency bears the likeness of a murder victim.

It’s funny the kind of history you can find in the change in your pocket. Read More
2 Comments

I like to start my day with a graceful essay ... Thanks.

On Election Day here in the United Stasis of America

Tags: current events, politics, press
Well, if you read my post from the other day, you know that I’m happy with yesterday’s presidential election result. But I greet it not with a sense of elation, but rather a sense of relief. And a bit of resigned foreboding, for in the end, after all those hundreds of millions of dollars spent in campaigning up and down the ticket, very little has changed.

The best news: The Tea Party-infused ideas that the Romney-Ryan ticket brought to a national referendum were rebuffed, and one can only hope this means the end of it. Though I doubt it, and that brings us to the bad news. The Senate remains Democratic, and the House remains Republican with no meaningful shift in the ratio of seats. More significantly, the Tea Partiers retained their clout within the Republican caucus in the House, even if they lost some seats, or chances for seats, in the Senate.

What this suggests is that across a broad electorate, the hard-right positions that cropped up during the campaign were rejected. But with the inherent corruption of gerrymandered Congressional districts, those ideas stay alive. If we’re ever going to find a way out of this morass of partisanship in Washington, we’re going to have to find a way to blow up the redistricting process, end the gerrymandering of safe seats for both parties, and move to a open primary system across the nation in which the top-two vote-getters in a primary face off in a general election in non-gerrymandered districts.

Otherwise, the system remains locked in stalemate here in the United Stasis of America.

Ironically, the framers of the Constitution saw the House as being responsive to the mercurial whims of the electorate, as the members face election every two years. The Senate was the to be the chamber of stability, with members selected every six years on a rolling schedule (one third up for election every other year). But with gerrymandering of Congressional Districts - unanticipated by the framers - the House members are now nearly as stable under a system in which the only real change seems to come from political pressures within the two major parties (Tea Partiers winning primaries in GOP-heavy districts, for example).

And so the nation toddles dysfunctionally on. And, as Billy Bragg sang, all we get is the sound of ideologies clashing: