Tags: personal, music
The Post Office was good to me twice this week (I already posted about the box of paperbacks): The 25th anniversary remaster of Bob Mould’s “Workbook” album, with a second disk of a live recording of the album and some other songs, as well.

Music comes and goes, especially pop and rock, but this is one of those albums that has stuck with me over the years. I was a middling fan of Husker Du, Mould’s first band, simultaneously drawn and repelled by the sheer mass of noise they created. Maybe not repelled – challenged is a better word. It was music that took work to listen to, to find the threads of melody through the controlled chaos and remarkably dense sound created by a three-man band. Cathartic, yes, but catharsis is never easy now, is it?

Then Husker Du broke up – atomized, really – and Mould disappeared for a few months and suddenly “Workbook” was out. I remember tossing the album on the turntable and hearing the first few notes of acoustic guitar on the opening track, ”Sunspots,” repeat and build at the same time into a mesmerizing solo display that Mould never would have done with Husker Du. This was new, and different, and he was clearly making a musical break from the past. It was transition as statement.

Then came the other tracks, harder-edged, plugged-in, driving and evocative at the same time. And intimate, as in “I See A Little Light,” which her performs in the video below:

As I said, pop and rock music fades quickly. But not this album. It remains as strong and fresh as when Mould first recorded it, and is still on my high rotation” list. It should be on your, too. Read More
Be the first to comment

Detroit: A Biography out in paperback with a new Afterword 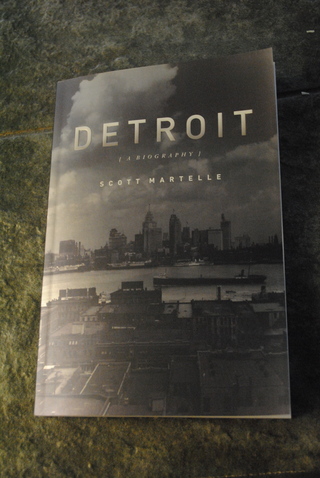 So I arrived home yesterday after the long slog on the train from Los Angeles and found a box delivered to the house. Part of the contents is pictured at left.

Yes, that’s the paperback edition of Detroit: A Biography, shipping now and available in stores (I hope; if your local is a smaller shop you might need to have them owner order it). It looks very nice – they kept the design from the hardcover, which is that great metallic-sheen finish over the 1929 photo of Detroit from Windsor, across the river.

The book also has a new Afterword, my attempt to wrap my arms around all the developments since I finished writing Detroit: A Biography in late 2011 (it was published in April 2012, nearly two years ago). I’ve pasted the first few paragraphs of the new Afterword below to give you a sense of it.

Overall, for all of Detroit’s troubles, strong flickers of life remain there that deserve nurturing, and hundreds of thousands of Detroiters need help from their fellow citizens.

As for the bankruptcy, I find myself in a lot of discussions about that. One recurring point: Pensioners and investors should not be on equal footing. The workers did their jobs for wages and promises of future support, and the city – bankrupt or not – has a moral obligation to them. The bondholders invested knowing – it’s the nature of investing – that there was risk, and many bond buyers received inflated interest rates reflecting Detroit’s shaky financial underpinnings. I have problems at a fundamental level with much of capitalism, but if people are going to play to play the investment game knowing they are putting assets at risk, they don’t have much room to cry for special consideration when they lose the gamble. Keep the pensions whole; let the gamblers ruminate on their losses.
_________________________

Seats on the second tier of Comerica Park, home of the Detroit Tigers professional baseball team, offer an impressive view of the downtown Detroit skyline. Tall buildings shoulder their way skyward beyond the center field fence. Some have the clean lines of modern architecture, but most are much older, dating back to the 1920s, and have been dirtied by time, with a patina of gray covering ornate cornices and other architectural details that exude a sense of history. And despite a surge in purchases in recent years, many remain shuttered and empty.

This is the cradle for the potential rebirth of Detroit, which ...  Read More
Be the first to comment

On John Hay's peculiar history, and a book review 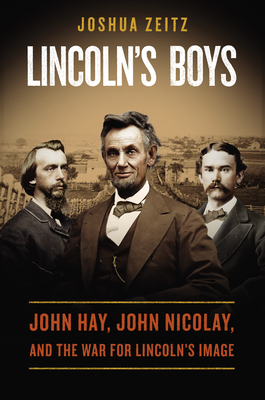 In writing The Admiral and the Ambassador: One Man's Obsessive Search for the Body of John Paul Jones, I got to spend some research time on the life of John Hay, who was the U.S. secretary of state when Ambassador Horace Porter, the main focus of the book, finally recovered the naval hero's body. I was already familiar with Hay, and was glad to learn more about his remarkable life, which included friendships with Abraham Lincoln, James Garfield, and William McKinley, three of our four assasssinated presidents.

So I jumped at the chance to review Joshua Zeitz's fine new book, Lincoln's Boys: John Hay, John Nicolay, and the War for Lincoln's Image, a review that just went live on the Los Angeles Times website and should be in the print edition this Sunday. From the review:

John Nicolay and John Hay were two young men working in Springfield, Ill., when they became involved with the political life of Abraham Lincoln before his 1860 U.S. presidential campaign. Tireless and smart, the friends, still in their 20s, proved themselves indispensable to Lincoln, who brought them along with him to the White House as his personal secretaries — in effect, the president's gatekeepers.

In his new book, "Lincoln's Boys: John Hay, John Nicolay, and the War for Lincoln's Image," author Joshua Zeitz skillfully recounts what were heady days for Nicolay and Hay, even as they were tragic days for the nation. The friends lived in the White House and wielded considerable power as advisors and conduits of Lincoln's orders. Over the four years of the Lincoln presidency, they had as good a view of the unfolding Civil War battles — both military and political — as Lincoln himself.

And after the assassination, the friends tasked themselves with chronicling Lincoln's life, leading to publication of the 10-volume"Lincoln: A History." The series and the related "Abraham Lincoln: Complete Works" co-edited by the two men remain part of the foundation for how modern Americans view the nation's 16th president. Or, as Zeitz phrases it, the creation of the "Lincoln Memorial Lincoln."

It's a fascinating work, a hybrid of traditional biography and historical storytelling. And with the sesquicentennial of Lincoln's death coming up in 2015, there will be a lot more books on that era popping up in bookstores.

Including one by me. But I don't want to get ahead of myself. First let's get The Admiral and the Ambassador launched in May ... Read More
Be the first to comment
Email here to arrange readings or order signed copies of any of my books