100 years ago today, the first death in the Colorado coal war 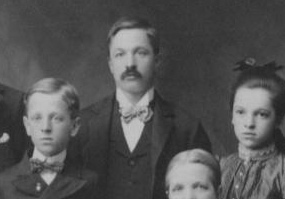 Gerald Lippiatt, with mustache, in undated family photo, courtesy of Gerald Lippiatt, a descendant.
Forgive yourselves for not having this day marked down on your calendars. But it was the beginning of unprecedented violence here in the U.S., as Gerald Lippiatt, an organizer for the United Mine Workers, was shot and killed in a confrontation in Trinidad, Colorado. His death was the first in at least 75 killings over the next seven months or so, including the 11 children and two mothers who died in the Ludlow Massacre.

These events were the focus of my first book, Blood Passion: The Ludlow Massacre and Class War in the American West. It remains a significant event in American history - not just labor history - as a strike in Colorado's coal mines escalated into open guerrilla war between union supporters and the mine owners, with the Colorado National Guard aligned with the corporations.

I thought I'd mark the day by posting the a few paragraphs from my book about Lippiatt and his final hours. And, of course, encourage you to buy a copy through your favorite or local independent bookstore, or through the link above.

Gerald Lippiatt , a stocky man with a bushy mustache, worked his way up North Commercial Street, his feet scuffing puffs of dust from the dirt roadway as he climbed the slight rise between the bridge over the Purgatoire River and downtown Trinidad. A full moon bathed the prairie-edge city in gentle light and a dry evening breeze wafted easterly from the Sangre de Cristo Mountains to swirl among Trinidad’s two and three-story wood and red-brick buildings. The Saturday night crowd thickened as Lippiatt neared the city center, passing the Colorado Supply Co., the Isis Theater, the Trinidad Hotel, the Sherman-Cosner grocery store, the Quilitch Brothers’ grain and farm-implements businesses. Ahead, just before the busy intersection with Main Street, a Salvation Army minister exhorted sinners to repent, his message stopping at the doors of busy first-floor saloons, pawnshops and narrow gambling halls. Trolleys rumbled along brick-lined tracks, blue flashes from overhead wires adding to the festive energy of a crowd shaking off the exacting drudgery of a week on the ranch, or of mining coal deep below ground.

Lippiatt, an organizer for the United Mine Workers of America, had been working in Trinidad for more than a week, and was helping prepare for a state Federation of Labor convention two days later at Trinidad’s new Toltec Hotel, a three-story brick building just down North Commercial Street from the city’s established gem, the Columbian Hotel. The convention’s top agenda item was to be Lippiatt’s union and its efforts to organize miners in Colorado’s southern coal fields – a task that so far had proven to be painfully elusive. Organizers had been jailed, some beaten by private mine guards and sheriff’s deputies, and a few had been killed. Within the mine camps, union supporters were summarily fired when found out, and the few strikes that erupted often ended under the barrels of state militia guns. So there was a lot to talk about at the convention, and throughout the day UMWA organizers, executives and representatives from other unions had been stepping off trains at the Colorado & Southern depot and following Lippiatt’s evening path into Trinidad.

The UMWA had been waging a strike since April 2, 1910, in Colorado’s northern coal fields, where Lippiatt had worked as a coal miner near the town of Frederick. Once he signed on as a union organizer, Lippiatt spent most of his time floating around the coal camps hatching strategies and persuading miners to sign cards. He was a stubborn man, not one to give up easily or to shy away from confrontation, but he could be quietly persuasive, too. The year before, Lippiatt and a colleague talked more than 50 foreign-born strikebreakers into quitting the Northern Fuel Co.’s Alpha pit near Boulder and join the union.

For all of his effectiveness, Lippiatt, 38, was an unlikely union organizer. Miners on Colorado’s Front Range were tough, muscled and largely uneducated men forced into the grueling and dangerous work for lack of other options. Lippiatt grew up with options. Born in December 1874 in County Durham, England, Lippiatt was the son of a miner who had worked his way out of the colliery by starting his own newspaper, which he sold to move his wife and six of their seven children to the United States in 1891. The family settled in Millville, near Akron in eastern Ohio’s coal-and-steel country, where the elder Lippiatt parlayed his financial stake into a mining and farming business. A social item in the August 9, 1894, Salem Daily News notes that Lippiatt’s father and mother had just booked passage for “their fourth trip over the Atlantic” on the City of Paris steamship – one of the premier ocean liners of the day. By the time Lippiatt went to work for the union, his father had become one of Millville’s civic leaders “in sympathy with the Republican party. He is a man of practical ideas, level-headed in business and frank in his intercourse with those he meets socially or otherwise.”

Why Lippiatt left the bourgeois comforts of Ohio for the wild and mostly lawless Colorado coal fields is unknown. His older brother, Herbert, had settled his family in Colorado Springs, between Denver and Trinidad, so perhaps that drew him West. Or maybe witnessing both sides of the owner-miner relationship in Ohio led Lippiatt to cast his lot with labor. Or maybe he just wanted to see more of the country and used mining to pay his way. Whatever the reason, by 1910 Lippiatt was working in the northern coal district when the UMWA led the miners in a walkout after coal operators there refused to negotiate a new contract. As secretary of the Frederick UMWA local, with 125 members, he’d had his share of run-ins with mine guards and the police, so confrontations alone – an elemental part of the job – didn’t faze him. In June 1911 Lippiatt and several other union activists were sentenced to six months in jail in Lafayette, just east of Boulder. He was sentenced to another six months in early 1913 after the Christmas Eve 1912 assault of Maggie Cox in Frederick. His activities led to a temporary rupture in local solidarity. In June 1912, fellow unionists in the northern field voted to “send three delegates to Denver to the District office and make a request of our district officials for the removal of Brother Lippiatt as official organizer,” a decision that was rescinded three weeks later without an explanation entered in the records.

But when union leaders decided to extend the strike to the southern field, Lippiatt was sent south, too, getting his orders on Aug. 7, 1913, along with three other organizers – Louis Tikas, M.V. Hibbs and John Petron. Lippiatt spent a few days in Trinidad then returned home to Frederick, north of Denver, for a brief visit and returned early that morning on the overnight train from Denver to help prepare for the convention.

But Lippiatt looked ahead to the Trinidad trip and saw death.
Be the first to comment
Email here to arrange readings or order signed copies of any of my books