Virtual research, or how to visit Paris from my desk 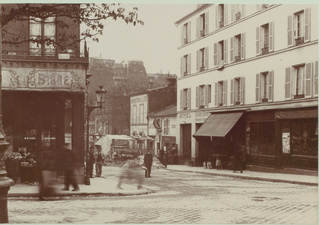 So in writing Jones's Bones: The Search for an American Hero, I've been buried deeply in old maps and descriptions, and not so old photographs of where John Paul Jones lived and died in Paris, and where he was buried. A natural point of curiosity, of course, is what do these places look like now?

To the left is a photo of the buildings that were erected over the cemetery in which Jones was buried in 1792 - the row, including the hotel, across the street, to the right in the frame. The picture was taken in 1905 from the street corner, and accompanied reports from the U.S. Embassy in Paris to the State Department in Washington.

Here, to the left and through the magic of Google maps street view, is what it looks like today. All the buildings over the cemetery have been replaced. But the cafe on the corner, left foreground, is still a cafe, modernized a bit.

Obviously, looking at photos and Google maps street view isn't the same as being there, but it's an easy way to find out whether anything would be gained by visiting in person. In this case, other than a good meal, visiting the scene wouldn't give me any insights or perspectives - which I'm glad to discover without the expense of a trip to Paris.

Though that would be fun - I haven't been there in decades.