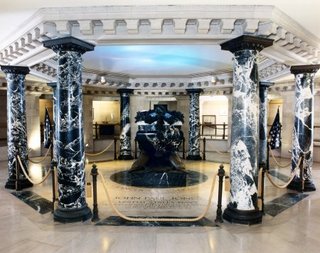 John Paul Jones's crypt in Annapolis. Photo: U.S. Naval Academy
With Detroit: A Biography doing well less than two weeks after its official pub date, I've already been looking ahead to the next project. And I'm pleased to let you know that my agent, Jane Dystel of Dystel & Goderich, has reached an agreement with Chicago Review Press for Jones's Bones: The Search for an American Hero (that's the working title, anyway), a look at the obsessive hunt in fin de siecle Paris for the body of the man recognized as the father of the U.S. Navy. I'm doubly pleased because CRP did such a great job with Detroit, and I'll be working with the same editor, Jerome Pohlen, and his crew.

John Paul Jones had a checkered life after the Revolutionary War, and died of natural causes in Paris in 1792 in the midst of the French Revolution. Amid the tumult, his body was dropped in the sole Protestant cemetery and the location promptly forgotten, the cemetery eventually covered over with buildings. More than a century later, U.S. Ambassador Horace Porter - a Civil War vet, former top aide to Ulysses S. Grant (in the Union Army and the White House) and the moving force behind establishing Grant's Tomb as a monument - decided Jones deserved better. So he made it so, in dramatic fashion and at his own expense, including digging a network of shafts and tunnels beneath buildings in Paris to explore the old cemetery to find the right body.

I've already done some early research, and it's a fascinating story. Look for it in Spring of 2014 (tentative). And naturally, there will be occasional updates before then.

Oh, and the crime novel I wrote? It's still wandering around publishing houses looking for a home. So think good thoughts for that project, too.
Be the first to comment
Email here to arrange readings or order signed copies of any of my books