Irony, and the notion of drilling in the arctic 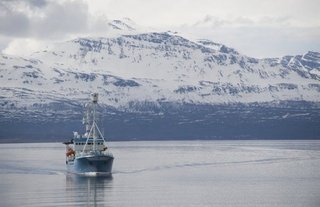 (AFP photo: Saul Loeb)
A news item this morning, complete with beautiful photos of the arctic, caught me up short, and I really hope the irony here hasn't escaped policy makers: Global warming has opened up polar regions so we can drill for more oil, whose burning in large part is how we got into this environmental mess in the first place.

So how about instead of careening down this foolish and self-destructive path, we agree internationally to leave the arctic alone and spend more serious effort in developing alternatives? Which brings me to a Twitter exchange I had yesterday with an old friend and current business journalist. She tweeted a link to a Los Angeles Times story about state regulators requiring new and renovated buildings be more energy efficient.

A noble idea, that. But we should go one step further and require solar installations in all new buildings, especially in the Sunbelt. It's mind-boggling that here in the high energy-consumption Southwest and West Coast, we burn fossil fuel instead of converting sunshine for the energy to light and cool our homes.

Requiring solar installations on new construction would add some initial costs to the buildings, but if we added incentives to install American-made solar panels, we could goose the domestic manufacturing economy, and over time the solar units' cost would decline. And the property owners would have lower utility bills, further reducing the cost.

It seems like a wasted a opportunity. And drilling in the arctic is foolhardy, at best, beyond the environmental risks it would entail. Same with the proposed Keystone XL pipeline from the Canadian tar sands to the Gulf of Mexico. Why would we want to make it easier to keep burning fossil fuels, instead of harder? It's like a drug addict burning through his family's money who, instead of getting help, looks for a cheaper drug dealer. What will it take for us to get more sensible about how we generate energy?
1 Comments

My advice to Americans: Stop voting for Republicans if you want to see sane, non-ironic policy with regard to Arctic drilling, gas fracking, or any number of fossil fuel endeavors. Those people don't respect nature or any branch of science that studies nature. They are moral criminals.