Let William Hughes tell you my Detroit: A Biography story 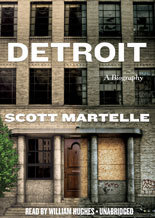 Cover of the audio version of Detroit: A Biography
This is lot of fun for me. A few months back, Blackstone Audiobooks bought the rights to Detroit: A Biography, and it looks like their version is already available. The cover is different from the print version, and the narrator is William Hughes, who, I noticed, also read The Soloist, by columnist and former Los Angeles Times colleague Steve Lopez. The book is based on Lopez's columns about a homeless classical musician, and was also made into a movie. So here's hoping some of that success rubs off via Hughes.

If you go to the Blackstone site for , there's a button to click that plays a short sample from the book. They selected a snippet from the chapter about the onset of the Great Depression in Detroit. It begins:

The “Roaring Twenties” party in Detroit – and elsewhere – ended less abruptly than we think. In retrospect, we tend to look at the stock market meltdown of late October 1929 as the economic collapse that sank into the Great Depression. In truth, signs of the bursting bubble began emerging well before then (and this is a bit of an historical mine field, with debates still ongoing over what really happened to spur the worldwide depression). In February of 1929, concerned over the vast amounts of money the nation’s private banks were lending to speculators investing in the stock market, the Federal Reserve asked member banks to “restrain the use, either directly or indirectly, of Federal Reserve credit facilities in aid of the growth of speculative credit.” It didn’t do much good. Broad consumer faith in the economic boom began to falter, and then turned into a financial panic with the Wall Street selloff, likely sparked by a mix of scandals and feared regulation of public utilities, and criticism at home and abroad of the “speculative orgy” on Wall Street. News stories detailed the first hemorrhages, which helped fuel the panic. In rapid order, several million people lost their jobs, their life savings, and their homes. Banks failed across the nation, and personal fortunes large and small evaporated. Small businesses withered and died; homeowners were evicted; farmers were booted off land they could no longer afford to tend. In an era of unregulated banking, thousands of small banks shut their doors, never to re-open, the deposits of their customers gone. By the end of 1931, the Great Depression was on. Billions of dollars of equity evaporated as the nation’s publicly traded companies lost 73 percent of their value through 1932 (ultimately the market would lose 90 percent of its value).

So go ahead, all you commuters, buy a copy of the audiobook and for a few days, anyway, start your workdays with my words - and Hughes's voice - in your ears.
Be the first to comment
Email here to arrange readings or order signed copies of any of my books