History's long arc, and Las Vegas, city of the ever-new 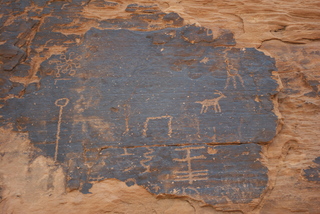 I'm taking a little break* from writing Jones's Bones: The Search for an American Hero with a long weekend in Las Vegas catching up with a handful of old friends from college - we all worked together on the campus radio station, WCVF, in the '70s. And we schlepped in from California, Utah, Washington state, and New York (three from there), which makes this a small but national reunion, I suppose.

Early Saturday morning I headed out with one of the friends, Stan Maziuk, before dawn to try to catch the early light in Valley of Fire State Park, about an hour east of Vegas. I was looking for petroglyphs, and had we more time I would have continued on to Lake Mead, now about 100 feet below its normal level. The depleted lake has exposed old settlements that were flooded in the '30s when the Hoover Dam was built, and the Colorado River backed up to form Lake Mead. I've been taken recently with the phenomenon of lost histories revealed accidentally, such as the ancient people's settlements that were discovered a few years ago on Colorado's Mesa Verde after wildfires scrubbed the earth clean of obscuring foliage.

At Lake Mead, the rising waters inundated a pueblo along one of the tributary rivers. Next time back, I hope to figure out a plan to get close to see what time, and water, have wrought -- or even if the ancient ruins are still discernible after all those decades.

Meanwhile. you'll have to settle for the petroglyph above.

* "Little break" is relative; didn't write much Friday or Saturday but put a few hours in the morning.
Be the first to comment
Email here to arrange readings or order signed copies of any of my books