On Detroit, and the wrong answer to difficult problems 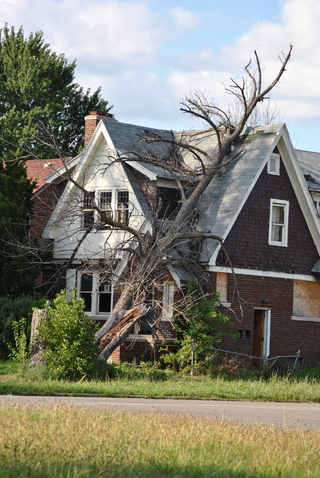 Photo: Scott Martelle, 2010
The Los Angeles Times today published an op-ed piece I wrote over the weekend about the governor of Michigan moving to name a financial overseer for Detroit. At its heart, as I wrote, this is an abrogation of democracy, a managerial coup d'etat. And it is shrouded in race - majority black city, majority white state - and politics - Democratic city, Republican state government.

Appointing a financial manager might resolve some of the city government's current cash problems, but it won't do anything to fix the city itself, which, as I point out in the piece - and in my Detroit: A Biography - has been declining since the 1950s. Detroit's troubles demand creative solutions, and a mix of actions, not this expected dismantling of the city and selling off of assets.

There are some hopeful stirrings in Detroit, from the investments in downtown buildings and businesses to the growing economic vitality of the midtown area, anchored by Wayne State University and a cluster of hospitals. But these are just stirrings, and fragile ones at that. They should be cheered, and nurtured, but aso recognized as baby steps in a place that needs giant strides.

We have a tendency in this country to turn our backs on failed communities, and to blame the victims alone for their problems. But Detroit is a national problem, and a national responsibility. We should be marshaling national forces to not only fix it, but to use Detroit to begin to re-imagine what a city can and should be in this post-industrial economy of ours. For far too long our governments have looked first at the health of corporations, and last at the health of communities, which in itself strikes me as an abrogation of democracy.

From the op-ed piece:

The emptying of Detroit stems from a complex mix of intractable racism, corporate and governmental decisions, failed institutions and crime levels that have driven most of the middle class to the suburbs. Local governments have regularly undercut each other with tax deals to lure jobs (much as Texas Gov. Rick Perry tried to do on his recent visit to California). These deals have helped corporations at the expense of communities like Detroit, causing the city's tax base to shrink faster than the city government could adapt and leaving it with massive debt, annual operating deficits, a demoralized workforce, an impoverished population base — and no plan for how to fix things.

It's time for new ideas. But the type that Snyder, a former venture capitalist (and onetime executive with the Irvine-based Gateway computer company) is likely to favor aren't what's needed.

Although the new financial manager for Detroit hasn't yet been named, it is likely that he or she will move to abrogate union contracts for city workers, gut city management ranks and sell off assets, thereby privatizing such government services as public transit, streetlights and trash collection systems. These things have the potential to reduce the city's costs and alleviate the immediate cash crisis, but they are disastrous over the long term, and they'll be done without approval by the city's elected leaders.

This kind of managerial coup d'etat is at heart an abrogation of democracy and a failure of vision. Slashing spending and privatizing assets won't fix Detroit, or any of the nation's other troubled cities. This crisis calls for reinvention.