On Detroit, and changed white attitudes 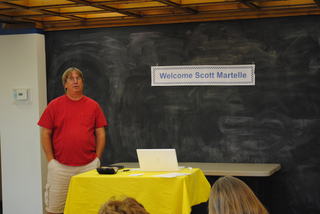 Photo: Margaret Mercier-Martelle
The woman sat with a friend to my left as I stood last night discussing Detroit: A Biography at Saturn Booksellers in Gaylord, Michigan (a wonderful little store and a wonderful event). I talked about the propelling role that race and racism has played in the evolution of the city, and she raised her hand and offered, paraphrasing here, that the racist attitudes of white Detroiters toward their black neighbors have changed since the crucial days of the 1950s and 1960s, as Detroit careened toward collapse.

Not so, unfortunately, I responded. As I write in the book, racism among suburban whites is still a driving force in the region. The book quotes a Facebook discussion about Detroit, which I cite as evidence of the private sentiments of some whites. And I noted to the woman that suburban Southfield and Oak Park - once white-majority cities to which black middle class families had fled to escape Detroit's violence and the abysmal school system - are now majority black cities as whites once again ran away from growing numbers of black neighbors.

Which got me thinking last night as I drifted off to sleep: If people think this is a post-racial society, can we ever truly get there? If people believe the struggle for equality has been won, when all evidence points to the contrary, has the fight ended?

After I responded and turned to another questioner, the woman and her friend were heard to say that the Facebook example in the book was just one person, and that it was an outlier. Society has gotten better.

Maybe things have improved, but not enough, when black urban poverty is taken as a given, churches refuse to let blacks marry, and presidential politics comes shrouded in a racial mantle.

Some things to think about as we hit the I-75 freeway and head south for a couple of days in Detroit.
2 Comments

Scott--
I think you have done more thinking about this than I have.
Just back from a week in Motown, first visit.
Important for me, though, since I am writing a book on the
city--and the Lions.
Growing up in L.A., I was only fan of the Lions I knew.
But I went to all Rams games in Coliseum (my friends and I sold programs there), and I got to meet Bobby Layne, Doak Walker, etc.
My book is about the parallels in the downward slide of both the team and the city.
Haven't read your book yet--but intend to.
From the short bits of talk and comment I picked up in the city and the 'burbs (I stayed in Southfield), it seems that
the city is divided and in need of a recognition of what that entails. Blacks seem to "get it," whites maybe not so much.
"Detroit is the most misunderstood city in the country."
That quotation comes from the youngish (25 or so) guy who rented me my rental car. He added that "Detroit" by telling me it was a great place to grow up, raise kids, etc.
He clarified "Detroit" by suggesting he was talking about the great suburban area on the other side of Eight Mile.
And one older woman (about my age) told me that the white people decided to vacate the inner city after Mayor Coleman Young told them, "Hit Eight Mile--and keep going!" That quote may note be exact, but I've heard the idea echoed by several other white peole. "He was a racist," they say, referring to CY.
Don't know if you deal with that quote in the book, but it seems to be at the heart of what has caused the mass exodus (that, and the '67 riots/rebellion).
I'd like to hear what you think. If you're making speeches in the city, I say "Right on!" Of course, I reveal my age in the process, but knowing that I met Bobby Layne in the 50s (and also in the 70s in Lubbock, Texas) makes me the opposite of a spring chicken.
I'd like to keep in touch as I plough through the material that makes up my story: Sweet Trial, '43 Race riot, plouging under Paradise Valley, the retirement of Barry Sanders, etc.

Sounds like you're onto an interesting topic, but I encourage you to do a lot more research before you link the plight of the Lions to what's happened in Detroit. It's really apples and oranges. But the young man you cite is quite right: Detroit is probably our most misunderstood city.