Politics, and why Washington doesn't work 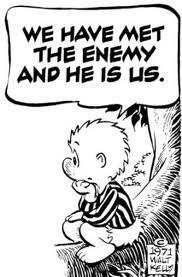 The Washington Post yesterday published a provocative opinion piece by Thomas E. Mann of the nonpartisan Brookings Institution and Norman J. Ornstein of the conservative American Enterprise Institute under the headline, "Let's just say it: The Republicans are the problem." With a headline like that, you just know the piece is going to be inflammatory.

And it is. Needfully so. They write:

"We have been studying Washington politics and Congress for more than 40 years, and never have we seen them this dysfunctional. In our past writings, we have criticized both parties when we believed it was warranted. Today, however, we have no choice but to acknowledge that the core of the problem lies with the Republican Party.

"The GOP has become an insurgent outlier in American politics. It is ideologically extreme; scornful of compromise; unmoved by conventional understanding of facts, evidence and science; and dismissive of the legitimacy of its political opposition.

"When one party moves this far from the mainstream, it makes it nearly impossible for the political system to deal constructively with the country’s challenges.

“'Both sides do it' or 'There is plenty of blame to go around' are the traditional refuges for an American news media intent on proving its lack of bias, while political scientists prefer generality and neutrality when discussing partisan polarization. Many self-styled bipartisan groups, in their search for common ground, propose solutions that move both sides to the center, a strategy that is simply untenable when one side is so far out of reach."

A powerful indictment, that, and the piece goes on to back it up (I highly encourage you all to go read it). But it also fails to give proper weight to the real problem behind the Republican Party's shift to extremism. The article quotes a line from former Republican Congressional aide Mike Lofgren, written at Truthout after he retired, in which he says the "Republican Party is becoming less and less like a traditional political party in a representative democracy and becoming more like an apocalyptic cult, or one of the intensely ideological authoritarian parties of 20th century Europe.” And Rep. Alan West's striking a Joe McCarthy pose and accusing Democratic members of Congress of being communists was a disgusting throwback to our red-bating years (he also has equated Democrats with Nazis).

Yet the writers of the Post opinion piece overlook a key factor here. Any American political party reflects the political views of members. Gerrymandering has helped lock in the power of the extremists in both parties, but you can't lose sight of the fact that the science-denying, red-baiting right-wing extremists in Washington were sent there by voters. The problem, and fault, lies in us, the electorate. The authoritarian nature of the GOP these days reflects the people who voted them in (and the right-ward cast of talk radio helped propel that after the FCC's Fairness Doctrine was killed during the Reagan administration) .

We are locked now less in a crisis of dysfunctional politics than in a crisis of the nation's political soul. And if you doubt that, go read the comments on the article linked above. As Pogo once observed, "We have met the enemy, and he is us."
4 Comments

Hi Scott... Congrats on Detroit...I was just meandering down your blog and noticed this post. While its fair to not that electorate can be blamed for choosing members of congress, we have to wonder what congress might look like if not for the way the electorate was royally screwed by the electoral college system in 2000, when Gore won a plurality by more than 540,000 votes over W. We Americans have always preached that a government should reflect the will of its people--and in 2000 we inadvertently proved the wisdom of that view, because W wasn't the people's choice. Gore would have had his own problems but the voters shouldn't be blamed for the first four years of W (and if there had been no first four, there wouldn't have been a second four.) Forgetting about 2000 and the EC are pet peeves

Thanks, Scott .... this is apples and oranges though. Congressional districts are set by the states, and that;s where the gerrymandering comes in, which lets the fringes have excessive influence on candidate selection. The 2000 presidential results were an abomination, but not Congressional. That more directly reflects this divide I'm talking about.

When you say "gerrymandering has helped lock in the power of the extremists in both parties," you're falling victim to the same false equivalency that Mann and Ornstein decry in their brave article.

There is a well-represented extremist contingent in the Democratic Party, but it's a corporatist/reactionary tendency, not a leftist one. Let's look at the party's leader, shall we?

*Barack Obama has not only asserted the right to murder American citizens, but, in the case of Anwar al-Awlaki, acted on it (he snuffed al-Awlaki's teenage son as well: take THAT, junior!).

* He signed the National Defense Authorization Act, with its astonishing provision that the military can indefinitely imprison American citizens with no judicial process.

* He has pronounced courageous whistleblower Bradley Manning guilty before his kangaroo court-martial has even gotten underway.

* As a senator, he voted for the law that gave the telephone companies retroactive immunity for helping the NSA illegally monitor all Americans' phone calls, e-mails and web searches (something which is still going on, by the way).

And yet you imply the Democrats are a bunch of flaming lefties? Get real. I speak as a former Democrat who has been betrayed by them too many times. They have better table manners than the Republicans, but every Republican outrage of the past generation has always had just enough Democratic support to be enacted.

p.s.: Saw you at the blogging panel at the BIO conference today; thought you did a good job.

I agree the Dems have not been affected as much by the far left as the Republicans have been by the far right, and I should have been clearer above. (Though I wouldn't go so far as to agree I am guilty of false equivalency). It's the structure of the gerrymandering I was focusing on that accents the power of factions, while simultaneously making it harder for people outside the broader folds of the Dems and Reps to have any significant effect (I'm thinking of unaligned voters here, who have, in most cases, no say about who their general election options will be) ). I also agree with your points about Obama, and would add a bullet point about the secretiveness of his administration in targeting whistle-blowers and journalists.

I also agree that the Dems have been dominated by the center-right, the old Clinton "third way" model, though it seems to be less of a faction than the mainstream approach by Democrats. The leftists have, well, left, and those that remain are too disorganized to have much influence within the Democratic Party, particularly at the local committee level. The far right, though, has been very effective at that (as have the Ron Paul folks, too, though to lesser extent).

Thanks for the kind words about the Bio panel, and I hope you enjoyed the other panels, as well.