The Festival of Books, and an unanswered question 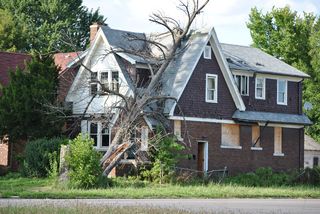 Northeast Detroit, summer of 2010.
Well, it was a hectic couple of days at the LA Times Festival of Books, with an appearance on a panel Sunday and writing up three blog posts for the Times's Jacket Copy blog Saturday and Sunday morning. But I found myself thinking last night about an answer that slipped away.

I was on the "We Built This City " panel Sunday, moderated by LA Times book editor Jon Thurber, and that included former Times c ity editor and columnist Bill Boyarsky and writer Rebecca Solnit. Boyarsky was there to talk about Los Angeles, Solnit about San Francisco, and I about Detroit. Before it was opened to audience questions, Thurber asked about catastrophic events, and how cities seem to pull together after them (something Solnit has written about) and why, in a case like Detroit, they don't. Before I got a chance to weigh in the conversation drifted a bit, and I didn't bring it back.

So here is my answer: Because people tend to respond to incidents they can react to in an immediate, and human way. We don't, as a society, react to slow evolution. Or, in the case of Detroit, a slow dismantling.

A popular theme in Detroit is to say that the city is just as devastated as New Orleans, but without the hurricane. There's some truth to that. People like to donate to the Red Cross and other organizations in the aftermath of a natural catastrophe, or something like the 9/11 terror attacks. It helps them feel connected, as though they've done something that recognizes their sympathy with those directly affected. It makes them feel good.

But when it comes to large but slowly unfolding socio-economic crises, we turn a blind eye. Especially if those suffering are outside the mainstream - people of color, the chronically poor, the detritus left behind by an economic ebb tide. Which is really quite interesting when you think about. These slowly unfolding crises are the results, in most cases, of national and corporate policies, regional housing patterns, a crumbling sense of physical community, and a surrender to individual fears and prejudices.

A hurricane we rally around. Our national sins, not so much. And it's all the odder when you realize that many of us who are getting by in this economy are one serious illness away from abject poverty - even those of us with health insurance. We need to pay more attention to these glacial, and transforming, changes in our national fabric, and our national priorities. We need to start thinking more about ourselves as part of a inclusive community.

A lot of people these days are quoting the Founding Fathers as they try to define what the government is, and should be. It would behoove us to heed another quote from that era, too, about what happens if we don't all hang together.....
Be the first to comment
Email here to arrange readings or order signed copies of any of my books