Why today should be marked in red on your calendar 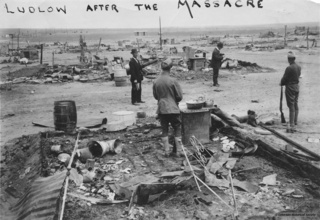 This date has a habit of sneaking up on me. I look at the calendar and am a little shocked to see it rounding out again. There are others who have the same feeling, I know (a few post on Facebook). But it remains just another day for most people, including labor supporters, which has long struck me as a bit of an insult to history.

It was 98 years ago today that a day-long gun battle erupted at a coal strikers' tent colony at the edge of the Great Plans in southern Colorado. The violence led to the suffocation deaths of 11 children and two mothers (they died in an underground bunker as fire swept through the tents above), but it also represented one of the most extreme encounters between workers and their bosses, and state military forces. Another child and several men were killed that day, too, including the apparent cold-blooded murders of union miners by National Guardsmen The deaths at Ludlow occurred within the sweep of a seven-month guerrilla war between the miners and their supporters, and mine guards and the Colorado National Guard. At least 75 people were killed in what amounted to open insurrection. Yet few of you have ever heard of it.

With the centennial looming - the strike began in September 1913 - I'm hoping the events at Ludlow gain more of our national attention. Meantime, after the jump you'll find a short excerpt from Blood Passion: The Ludlow Massacre and Class War in the American West, my first book, about that long ago day in southern Colorado:


The fighting grew in intensity, and confusion. Linderfelt’s men made three attempts to move from Water Tank Hill northward, hoping to dislodge the strikers taking cover in the railroad cut. Lt. Lawrence led one of the first forays but made little progress before a bullet struck Pvt. Alfred Martin, thirty, of Denver. Blood gushed from a neck wound and Lawrence used his thumb to try to stop the flow, then fellow soldiers bandaged him up. As they retreated they tried to carry Martin with them, but the gunfire was too intense, so they hid him beneath a bush as the strikers pushed them back toward Water Tank Hill. When they regained that land near dusk, they found Martin dead, and word spread among the soldiers that he had been badly mutilated – shot a second time through the mouth at close range, and his face crushed in as though struck with a rifle butt. Some time in the morning a bullet also hit a striker in the temple, and he either crawled or was dragged into the water well, where he lay, delirious with pain, on the top platform as more than 20 women and children huddled below, listening to the echoes of gunfire above. “He was hurt so bad,” Korich said, “he cried and cried.” On the road outside, Primo Larese, 18, the son of a Trinidad brewery worker, stopped to watch the fighting while en route to visit a friend in Hastings. A bullet ripped off the top of his head, killing him instantly.

The battle was not being fought in a vacuum. Around 10 in the morning, Ora Linderfelt, the lieutenant’s wife, made a panicky call to the Trinidad National Guard armory, where the new Company A was being put together. “She said the troops at Cedar Hill were being killed and that they wanted to have help.” The soldiers rounded up their gear, including a machine gun, and headed for the train station. In what by now had become a common occurrence, the union crew refused to work the train, and the soldiers were delayed an hour until a less recalcitrant crew could be found. The troop train arrived in Rameyville, on the southern side of the hill overlooking the Cedar Hill military outpost, around 1 p.m.. With no wagon to move the heavy machine gun closer to the battle, the troops commandeered a car near the station driven by W.J. Hall, who was out for a drive with a friend, the friend’s daughter and another man. “I was under the impression that it was of no use trying to resist letting them have the car.” Hall knew a few of the soldiers, but not all. One named Jack Cold placed the gun in the back of the while another handled the tripod. Still others slid heavy long boxes of ammunition – about six inches high, a foot wide and eighteen inches long – in beneath the gun. Hall slowly drove up the hill to a crest overlooking a steel bridge, where the soldiers unloaded the weapon and ammunition. While Hall was there, a commander he didn’t recognize gave the order of the day: “For those men to go in and clean out the colony. For them to drive everyone out and burn the colony.” As Hall drove back down the hill, the machine gun opened fire, adding to the constant chatter from Water Tank Hill.

Reinforcements chased in from all directions. Mine guards and scabs emerged from out of the Delagua and Berwind canyons to join the militia, and armed strikers headed south from Aguilar. Two doctors, Aca Harvey and Joseph Davis, arrived in a horse-drawn buggy after being summoned by union officials to tend to wounded strikers. But their buggy was stopped by several men who had gathered near Bayes’ ranch, northeast of the colony. “They told us we couldn’t go any further, that it wouldn’t be safe.” Harvey could see some of the strikers and militiamen jockeying for position in the distance, guns cracking. Harvey decided to press ahead alone, figuring one doctor stood a better chance of slipping into the battlefield than two. Davis climbed back in the buggy and headed back to Aguilar. But after Davis left, Harvey realized he would need help toting his medical bags; Bayes volunteered and the two men, moving low, headed for the arroyo.

One striker was reported lying wounded near the pump house off the C&S tracks just north of the colony, next to the well hiding the women and children. The two men followed the arroyo to within 100 yards when shots rang out from around Dominic Ray’s stone farmhouse about 300 yards west of the water well. One of the bullets whizzed past Bayes’ head, and he dove into a low spot for cover. Other bullets narrowly missed Harvey, who was trailing behind and even more exposed. The doctor scurried across a barren section before diving into a cutout. He unfurled a small white flag he had ripped from a cotton sheet and tried to signal that he was not part of the battle. “Every time I stuck it out, it would be shot at.”

Bayes waited more than a half hour for Harvey to catch up with him. When the doctor didn’t move – “I think it was cold feet,” Bayes said – Bayes dropped back with the bags, left them with Harvey, and headed home. A handful of strikers, meanwhile, made their way to Harvey and began returning fire on the stone house, offering cover for the doctor to sprint across the open space to the rail bridge. “I found a man there who was shot through the head. He was not dead, but he was dying.” This may have been Rubino, the man felled running for the arroyo. The strikers told Harvey of another wounded man further north, by the pump house. His pockets stuffed with supplies, Harvey crawled along the rail line until he reached the water well and slipped over the edge. He saw the Korich family, the Gorcis, Thomas and others, huddled with fear and damp, and two wounded men on the upper level, just out of reach of flying bullets. “One of the men that was shot crawled away,” Harvey said. The other man, the one Korich heard crying, stayed in place, Harvey trying to treat his wounds.
2 Comments

I always want to celebrate the Flint sit-down war. Not only a brilliant tactical campaign, involving feints and misleading the spies and women smashing windows to fight tear gas and...and...and. And, of course, it was a victory. Unlike most of the other labor red-letter days.

Thank you for keeping the memory of Ludlow alive. Few people are aware of what happened there and what the workers and their families sacrificed in the stuggle for basic rights. My grandfather's brother, Charles Costa, his wife Cedi, and their two children were killed at Ludlow. I grew up hearing family stories about what happened there, but never heard a word about Ludlow in any history class.