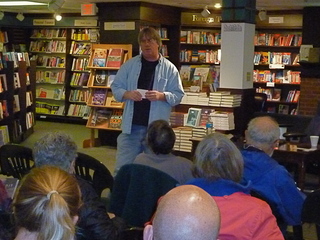 One of the many highlights of the book talk and signing part of this business are the moments of surprise, and the chance to encounter folks whose lives have intersected with the topics of one of my books. I’ve been chatting for the past couple of days with a lot of ex-Detroiters in Ann Arbor and Lansing, nearly all of whom have been white, and who left (or whose parents left) Detroit years ago. And it’s interesting to hear anew what that history looks like from inside the personal decisions.

Most have been receptive to the analysis of the broad themes of Detroit’s decline (racism, corporate decentralization, failing institutions, etc.), and been keenly interested in how to stanch the bleeding and begin rebuilding. But mixed in among the conversations was a wonderful path-crossing with Dan Green, who lives with his wife outside Ann Arbor and whose father figured so prominently in my last book, The Fear Within: Spies, Commies, and American Democracy on Trial. Gil Green was a top official in the Communist Party-USA, and was one of the defendants in the Dennis v. U.S. case that was at the heart of my book, and whose conviction, for a time, made belief in a specific political theory effectively illegal (as we well known, the Supreme Court doesn't always get things right). It was a great pleasure to finally meet Dan after so many email exchanges as I was working on that project.

The first talk of this trip was at Nicola’s Books in Ann Arbor, a great independent bookstore (picture to the left). Tuesday evening I spoke at a Barnes & Noble in Lansing, with great interest and support from the staff. Tonight I'm at the Anchor Bar in downtown Detroit (something of a home game; that’s the old newspaper hangout when I lived in Detroit), and Thursday I’m at The Book Beat in Oak Park, another great independent bookstore, where I'll be "in conversation" with friend M.L. Liebler, the hardest working man in poetry. Mixed in are some talks before classes at Wayne State, and Friday morning a talk at TechTown, a business incubator near Wayne State.

Then, like the Easter Bunny, I hop back west in time for Easter. Somewhere in there: A nap.

Thanks to all of you who have come out for the talks, to the journalists and bloggers who have written about the book, and to those of you who have plunked down hard-earned cash for copy. Obviously, without a book-buying public, I – and other writers – wouldn’t be able to do this kind of work.
Be the first to comment
Email here to arrange readings or order signed copies of any of my books