On poverty, and the obscuring nature of numbers 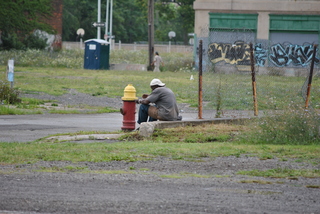 Detroit: Summer 2010. Photo/Scott Martelle
The U.S. Census has released new estimates that show poverty levels in the U.S. jumped last year to 15.1 percent of the nation, up from 14.3 percent the year before. Percentages are usually the best way to understand such shifts, because they help set the context. But in this instance, focusing on the poverty level as a percentage obscures things, turning the real into the abstract.

For instance, that increase of .8 percentage points over the year before represents, in real numbers, an additional 2.6 million people who were living in poverty in 2010, who weren't living in poverty in 2009. For scale, the city of Chicago's population is about 2.7 million. So imagine adding the nation's third-largest city to the poverty rolls in the span of a year.

Overall, and in real numbers, some 46.2 million people are now living in poverty, nearly equal the entire population of the three West Coast states (a combined 47.8 million people).

Our definition of what constitutes poverty is absurdly, and indefensibly, low. Tens of millions of our fellow citizens are struggling in deep need - with more being added every day. Tens of millions more are struggling to live just a few rungs above the poverty levels. This isn't an abstract, philosophical thing. These are flesh and blood people. Our neighbors. Our relatives. Our friends.

We have a moral responsibility to do something to help them. And in turn to help the nation in general. In a consumer-based economy such as ours, we have, through government and corporate policies, undercut the consuming classes. Sure, free trade agreements like NAFTA may have helped keep prices lower at the retail level, but we're saving ourselves into economic oblivion. A consumer economy without consumers is an engine without gas. The only winners are corporations and their shareholders, who don't care about the community impact of their pursuit of profits.

And who don't care about the growing stain of poverty across the national map.