Joe Hill, and the killing of an icon 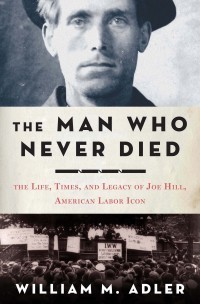 There's a new book out next week - not by me - that comes the closest I've seen to figuring out what really happened in a century-old murder case that led to the execution by firing squad of Joe Hill, a Wobbly organizer and songwriter who became the face of radical American labor.

The book is The Man Who Never Died: The Life, Times, and Legacy of Joe Hill, American Labor Icon, by William M. Adler, who my Detroit friends might recognize as the author of Land of Opportunity, the story of the eastside Chambers brothers crack empire.

Hill, whose songs were largely parodies of contemporary pop music and religious hymns, was an agitator of the lyrical kind. Others wrote songs for the Industrial Workers of the World - the Wobblies - but none with as much wit, or drive. So when Hill turned up wounded in Salt Lake City on the same night a father and son were murdered in the family grocery store, Hill made a convenient suspect for the Salt Lake City police. It didn't help Hill's case that the Wobblies were actively organizing in Utah at the time, much to the consternation of the local business leaders and the local newspapers.

And drawing on a long-forgotten letter, Adler establishes to a point of near certainty that Hill was not guilty of the killings, that he had been shot by a rival for a woman's affections (it's her letter Adler found) unrelated to the grocery store case, and that Hill had been railroaded by a local power structure blinded by his radicalism and intent on stomping out the Wobblies. The New York Times this morning has a nice overview of the book and Adler's findings.

Incidentally, Hill's story overlaps with that of the Colorado coal field war and the Ludlow Massacre, the subject of my first book, Blood Passion: The Ludlow Massacre and Class War in the American West. The grocery-store killings occurred in January 1914; the Ludlow Massacre came that April; Hill was executed in November 1915. While Hill's trial and the coal field war were separate events, they both occurred against a backdrop of significant class frictions, upheaval, and a rich-poor gap that rivaled conditions today.

I encourage you all to pick up The Man Who Never Died. Even if you're not that interested in the history of radical Americans like Hill and the Wobblies, Adler has done a fine job of finding the human story behind a complex set of details, and lays them out in a highly readable narrative. It is a story of injustice, but also about an odd sense of chivalry, and Hill's eventually fatal desire to keep his lover's name out of the public eye.

Ultimately, it turns out Hill likely was executed by a Utah firing squad because he put too much faith in the American court system's ability to discern truth, and justice. Maybe now the truth has won out. But it's far too late for justice to have been served.

Embedded here is a contemporary cover of one of Hill's best-known songs.