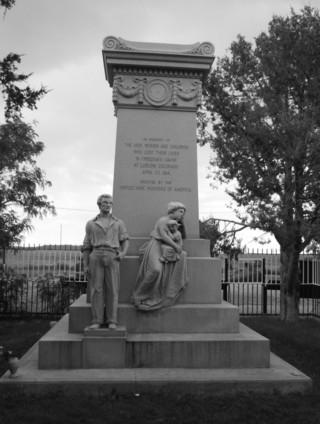 The Ludlow Monument. Photo: Margaret Mercier-Martelle.
I leave tomorrow to spend a week or so on the road doing some freelance stories during a trip framed around a tragedy - the 1914 Ludlow Massacre, the event that launched me on the path to writing books.

Regular readers here know the basics. During the 1913-1914 Colorado coal strike, 11 children and two mothers died when, at the end of a daylong gun battle, Colorado National Guardsmen torched the Ludlow tent colony. The women and children were hiding from the bullets in a hole dig beneath the floorboards of a tent; as the fire raged above them, it sucked the oxygen out of the air. As tragic as the deaths were, they were only a fraction of the 75 people who were killed during that strike, most of them shot to death in the most violent showdown between labor and capital in U.S. history.

Yet few remember this moment. A few years after the Ludlow Massacre, the United Mine Workers union bought the site of the tent colony and have managed it as a roadside spot of reflection, and homage. In recent years, at the end of June, the union has hosted a memorial service to try to keep alive the memory of the dead from that day. It begins at 10 a.m. Sunday at the Ludlow Memorial site a short drive north of Trinidad along Interstate 25. I'm honored to be part of the line up of speakers this year.

Despite winning designation as a National Landmark a couple of years ago, the Ludlow Massacre remains a forgotten moment in U.S. history. That's partly, I think, because it happened here in the West, while our collective national memory is East Coast-centric. And I say that as someone born in Maine and raised and educated there and in Western New York. I came with an east Coast bias, in other words, but after more than a dozen years living in California I’ve come to recognize that, in a historical sense, the nation tips eastward. Which makes sense. The United States began in the East, and the bulk of our formative history lies in the East, so that’s where our memory is focused.

But more significantly, Ludlow is forgotten because it involved labor. And that's a dark hole in our collective memory. Workplace safety, the eight-hour workday and the 40-hour week, health insurance and retirement plans and everything else that we find ourselves once again fighting to protect, those all began with the labor movement. And as the strength of labor has faded, so have those hard-won benefits - and the middle class along with them.

That old maxim seems to be coming true, that those who forget the past are destined to repeat it. Let's hope we don't wind up repeating tragedies like Ludlow. Let's hope all this national anger, frustration and class division builds into something positive.

Looking forward to the event and your talk. But for the record, it's Interstate 25 north from Trinidad, not 24.

I knew you would get it together and head north. I am centered in Colorado and am thinking of you and how as the world turns it is that you wrote about Ludlow and that you are part of THE DAY! And you live in Irvine. Amazing it is this world.