The summer of John Paul Jones, and high-impact gardening 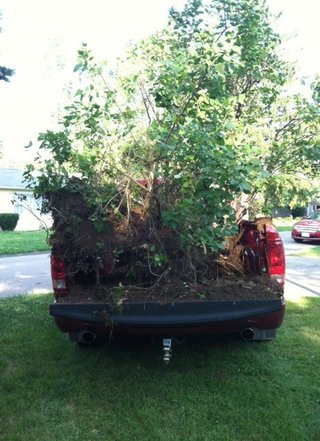 Photo - and truck - by Craig Martelle
Posting has been light around here for a variety of reasons, most deriving from being on the road. I'm in Western New York now, bouncing between my parents' house in Wellsville and my in-laws in Rochester. Lotta labor on the Wellsville end as my brothers and I have been digging out old rotted lilacs, scrub brush, railroad ties and the occasional yellow-jacket nest (I won't show you the welts from the stings).

The picture at left is a mass of lilacs (one of many) that we dug out with a backhoe and are taking to a gully on land one of my brothers owns that needs fill. The lilacs haven't been thinned in decades, and the trunks and roots were too rotted to save. We're thinking of replanting with new, healthy lilacs, but may just leave the open space.

And, every morning, I'm working on the manuscript for Jones's Bones, at a pace of at least 1,000 words a day. It may please you to know that I've just polished off the Battle of Manila Bay. As for why, you'll have to wait for the book to find out (I'm such a tease, I know).

We begin the drive back to California in a little more than a week, with a stop at Saturn Booksellers in Gaylord, Michigan, on August 14 for a talk and signing. I'm really looking forward to that - I imagine there will be a lot of interested folks turning out, most with personal Detroit stories to tell. It should be a very engaged conversation. I hope to see some of you there....
Be the first to comment
Email here to arrange readings or order signed copies of any of my books