Why Wisconsin matters to all of us 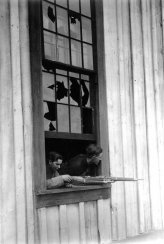 Mine guards during the Colorado coal strike, the subject of my first book, Blood Passion: The Ludlow Massacre and Class War in the American West
The unfolding of the absurd events in Wisconsin hasn't had the same drama as the revolutions sweeping across North Africa, but it could have a longer-lasting effect on America's (growing) working and (shrinking) middle classes. Below is an op-ed I wrote last week but couldn't find a home for. It still deserves an airing, I think:

It’s one thing for a political leader to take a principled stance against the power of public employee unions in state and local politics. It’s another thing entirely when you threaten to unleash a military force against them. And in raising the specter of calling out the National Guard in a possible showdown with public employees in Wisconsin, Gov. Scott Walker has touched one of the most painful scars in American labor history.

No wonder union supporters have reacted with so much anger.

Why should we all care about what’s happening to state workers in snowy Wisconsin? Because Walker’s draconian move is not an isolated act. Similar, if less sweeping, proposals have aired in Ohio and Tennessee to try to undo what has become the recognized right of public workers to organize and, using the strength of their numbers, to improve the conditions and wages under which they work.

Walker’s efforts in Wisconsin are the most reactionary, and would limit about 175,000 state employees’ collective bargaining rights to wages alone, which in any case could not increase beyond the rise in the cost of living without a public referendum. That doesn’t leave much to negotiate over. And this clearly isn’t about saving the state money. It’s about power.

Political moves against workers’ rights further evidences the staggering gap between the relatively small tier of political and financial elites, and the growing ranks of the working poor. And for many, the sight of thousands of protesters descending on Wisconsin’s state Capitol is being hailed as the first tentative steps of a nation of workers finally saying, “Enough.”

Whether you support unions or not, organized labor’s successes – particularly those of the United Auto Workers – were instrumental in the rise of the American middle class, and in the expansion of social safety net programs nationwide. And rather than causing our current financial crisis, unions represent the last vestiges of what had been the American Dream. They are the canary in our national coal mine, their health following rather than leading America’s economic decline.

In that vein, the suddenly precarious position of public-sector unions can be read as an indicator of the ill health of our governmental institutions.

More ominously, though, in Wisconsin Walker excluded from his union-busting agenda the state’s police and firefighters, who represent two of the three forces that historically have been used to violently suppress labor. The third is the National Guard, whose traditional role in labor showdowns has been to break picket lines, stymie strikes and end protests.

It’s a long history, from the 1914 Ludlow Massacre (11 children and two mothers killed by the hands of Colorado National Guards) to the 1934 Electric Auto-Lite strike in Toledo (two people killed and scores more wounded by the Ohio National Guard) to the 1934 declaration of martial law in Minneapolis during a 1934 Teamsters strike, which filled city streets with the Minnesota National Guard. The same year, the California National Guard took control of the San Francisco waterfront during a general strike, lining the Embarcadero with machine gun-topped military vehicles and cannons. The Guard worked with police and vigilantes to raid offices and social clubs of labor and radical groups, destroying property and arresting hundreds of people.

In all those instances, then National Guard was used in the abject repression of organized labor, which has a long memory. Walker, by announcing he would deploy the National Guard to ensure delivery of government services, delivered a threat that could not have been more clear.

The move represents a sad reality of our modern age: a creeping sense of heartlessness by political and business leaders. Private sector workers won the right to unionize during the dark days of the Great Depression, in part to take some of the steam that was propelling communists and other political radicals, and partly out of a sense of fairness. Public employees began winning the same rights in 1959, in the wake of McCarthyism, which tossed thousands of people out of public employment because of their political affiliations. Wisconsin, symbolically enough, was the first state to grant public employees the right to organize, and all but 12 other states eventually followed suit.

So now, during the Great Recession, the worst economic crisis to hit the U.S. since the Great Depression, Walker and other anti-union politicians are using state fiscal crises as an excuse to attack the collective bargaining rights of their workers. They might try to frame their moves in fiscal terms, but this isn’t about money, it’s a power grab backed in Wisconsin by the threat of a gun-toting militia.

Politics, of course, is all about opportunism, and manipulation, and gamesmanship. But Walker, and those in other states who would use these days of desperation to further erode workers’ rights, exhibit those dark political traits at their worst.

As a retired worker from Eastman Kodak (non-union) and a professional Engineer (non-union)I would like to express my suppoort for the union movement. We at Kodak and other non-union companies need to admit our debt to unions for bringing about improvement in wages and benefits which were shared by union and non-union workers alike. The current union suppressing efforts, if successful will surely reverse much of those hard won gains in the long run, to say nothing about the harm that will be done to ourrent fragile economy right now.

This is the Walmart mentality creeping over the edge into reality.