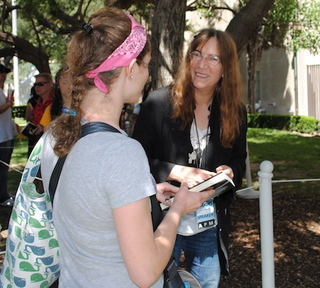 Patti Smith signing Just Kids for a fan at the Los Angeles Times Festival of Books. Photo credit: Scott Martelle.
Now that the buzz-saw of writing and researching the Detroit project has died away, I've started chipping away at an embarrassingly high stack of books that I really should have read by now, some by friends, some that have just struck my curiosity. And since it's too late to review the books for publications (and I couldn't review many of them because of personal conflicts), I'll be sprinkling some short takes into the blog mix over the next few weeks.

I finished Patti Smith's Just Kids the other day, her National Book Award-winning memoir of living and trying break through as an artist in Manhattan in the late 1960-early 1970s. The book couldn't live up to its advance buzz, and true to form, I liked it, but also was disappointed by it.

Manhattan was defined by creative counter-cultural energy in that era, and Smith and her lover/friend Robert Mapplethorpe hovered near the center of it. To read Smith's take on the time was interesting, and valuable, but it also fell short of full truth, I feel. I was talking about the book with some other reviewers at the Los Angeles Times Festival of Books over the weekend, and we agreed that she over-romanticized what were nearly impossible living conditions in sections of Manhattan - heatless flats, hustling sex for food money, drug deaths of those who experimented too wildly.

And Smith's depiction of her relationship with Mapplethorpe, who became one of the most divisive photographic artists of the era, was remarkably thin on two levels. First was their romantic relationship, which transformed radically as Mapplethorpe began embracing his homosexuality - a revelation that would cause deep emotional turmoil for most women, but that Smith all but shrugs off. And despite her closeness to Mapplethorpe, and her descriptions of the different art forms he was experimenting with before he shifted fully into photography, by the end of the book you have little sense of what was driving his - or her - art beyond Mapplethorpe's lust for fame.

There's plenty of name-dropping in the book, and one charming anecdote of the poet Allen Ginsberg, who was gay, mistaking the rail-thin Smith for a young man and trying to pick her up at a food automat. But mostly it is a thin revisit to an era. By definition Smith limited the book to the New York/Mapplethorpe years, but one wonders about her emotional reaction to the death of her husband, Fred "Sonic" Smith, five years after Mapplethorpe died of AIDS. The deaths of two significant players in the emotional life of a poet are worth exploring, and reading about. But Smith doesn't touch on it.

In the end, I suspect the book received such critical acclaim, and strong sales, because it serves less as an informative memoir of two influential artists than as a generational touchstone. For those who lived through that era, Smith's book is something of a vicarious trip down memory lane. For those too young to have tasted New York in the 1960s and 1970s, Just Kids offers a small, if somewhat romanticized, window into an era. But for a memoir by a poet, Just Kids lacks significant emotional punch.

Hey Scott, what an interesting take on the book! What you see as thin and over-romanticized, I truly loved. For me, Patti Smith was trying to capture the excitement and enthusiasm of youth at the same time she exercised the discretion and kindness of a woman in her 60s. I am a bit younger than the author, but I loved NYC in the late 1970s and 1980s--with all its gritty dangers and pleasures. I can catalog the many really terrible problems of that city--but I can't help missing it.

I loved NYC in that era, too, which as you imply is what touched you about the the book. From a poet, though, I expected less travelog through history and more trenchant and honest engagement with her own past. That said, it's still a good book and a worthwhile read. As I intimated in the post, I was expecting more. If I was expecting less, I might have had a more positive reaction to it...