On d. boon, the desert, and the flash of the unpredictable 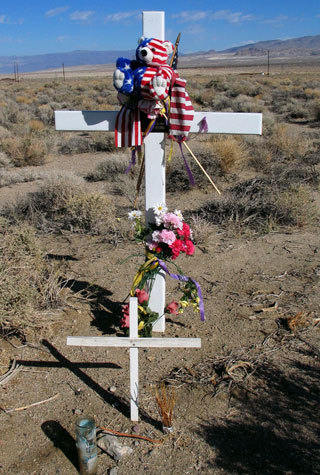 The dust cloud first caught my eye. I’d been on the road for 90 minutes or so this morning, was just east of Palm Springs on Interstate 10, when the puff of dust exploded on the other side of the median. It was a gray car and it seemed to wobble a bit as the driver, who’d drifted off the freeway onto the desert space between us, struggled to regain control. For a flash the car was pointed directly at me in the eastbound left-most lane, then it veered sharply away and across three lanes of westbound traffic as other cars, their drivers stomping on the brakes, seemed to genuflect. The spinning gray car flipped into the air and landed on its roof off the edge of the freeway, kicking up yet another burst of desert dust.

And then I was past it.

It’s remarkable how much detail you absorb in the span of a second. Or maybe two. And how simple functions momentarily move beyond reach. I couldn’t remember how to dial 911 through my car’s voice-activated system so fumbled to pull the cell phone from my pocket, the irony hovering while I punched in the numbers. It rang through on the dashboard speaker and I told the dispatcher where I was and what I had seen. “You’re probably going to need an ambulance,” I said, thinking to myself: Or the coroner.

When you drive a lot, you evolve a detached sense of safety. Crashes happen to other people. A whisper of anxiety might come as you pass roadside crosses draped with plastic flowers, but it’s for other people’s pain. Other people’s losses. We get lulled into a sense of invulnerability.

After the 911 call ended the stereo kicked back on, piping in music from my iPod, set on shuffle. I don’t remember what song was playing when the other car did its freeway shimmy then flip. But the next song up was “History Lesson Part 2,” an old blast of punk by The Minutemen, whose lead singer, d. boon, died when the van he was riding in rolled off the same freeway farther east, just over the Arizona border – which I would soon pass as I headed to Phoenix. I nudged the cruise control down a few ticks. I was going to be early anyway.

After settling into my hotel room, I called up Palm Springs news sites to learn that, miraculously, no one was hurt in the rollover. Though early Tuesday, on the same stretch of the I-10, a woman died in a ball of flames after drove onto the freeway in the wrong direction and head on into a tractor-trailer truck.

I think I’ll drive home along a different route.