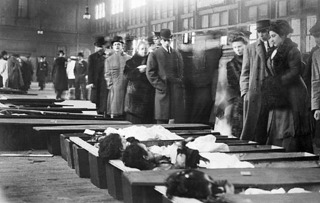 Some of the victims of the Triangle Shirtwaist factory fire.
Like many people, I've been watching the events unfolding in Wisconsin with a sense of fascinated revulsion. The rank opportunism of political figures in using the financial crisis to blow up public employees' rights to organize is as callous a move as we've seen in a long time (though I am very heartened by labor's response; general strike, anyone?). Same for the folks in Congress using the crisis to defund public broadcasting and Planned Parenthood. None of those proposals do more than throw a pail of water on a raging fiscal fire; the motives are based on shifting power, not balancing budgets.

But the fire analogy is apt. The New York Times this morning has a wonderful story about how the obsession of one researcher has led to the identification of the final six victims of the Triangle Shirtwaist factory fire, which marks its 100th anniversary on March 25th.

Like the ludlow Massacre, the Triangle fire was a critical moment in the union movement, and the sheer scope of the tragedy - 146 killed as fire raged through a sweatshop in a building that is now part of New York University - led to significant reforms in fire codes, building codes, and working conditions.

It's a good lesson to learn from history in these union-busting days. Labor's response to that fire, and the pressure it put on government, revolutionized fire, safety and labor codes. For those who would have less government, it's a good juncture from which to look at "before" and "after." What working conditions were like when business owners were given a free hand, and the safeguards we as a society decided were necessary to rein in their killing excesses.

Remember, in that era, workers were considered disposable (some things don't change). In the Colorado coal mines, workers were valued less than mules. If a worker was killed, managers could always hire another one, in essence renting time and labor from another supplier. A mule, on the other hand, would have to be replaced. My guess is the owners of the Triangle sweatshop lamented the loss of their sewing machines as much if not more than the loss of life.

Unions emerged for a reason. And as the balance of power - and wealth - continues to shift toward corporations and away from workers, no matter the color of their collars, we would be well served by understanding how and why unions came to be in the first place. And those who think their relevance is in the past could not be more wrong. As long as our national policies and, for that matter, our national psyche, values profit over people, there is a need for unions.
1 Comments

Are we going to let the Tea Party redefine America for the rest of us? And by "us" I mean you and me...people with brains as well as hearts and complete with all the bells and whistles like a conscience and a sense of right and wrong.

I ask you, what is more American than unions?

If these monied thugs succeed, what all-American facet of our lives will be the next to go? One man/one vote? Wait...the right-wing controlled Supreme Court has already struck a mighty blow against it, right?